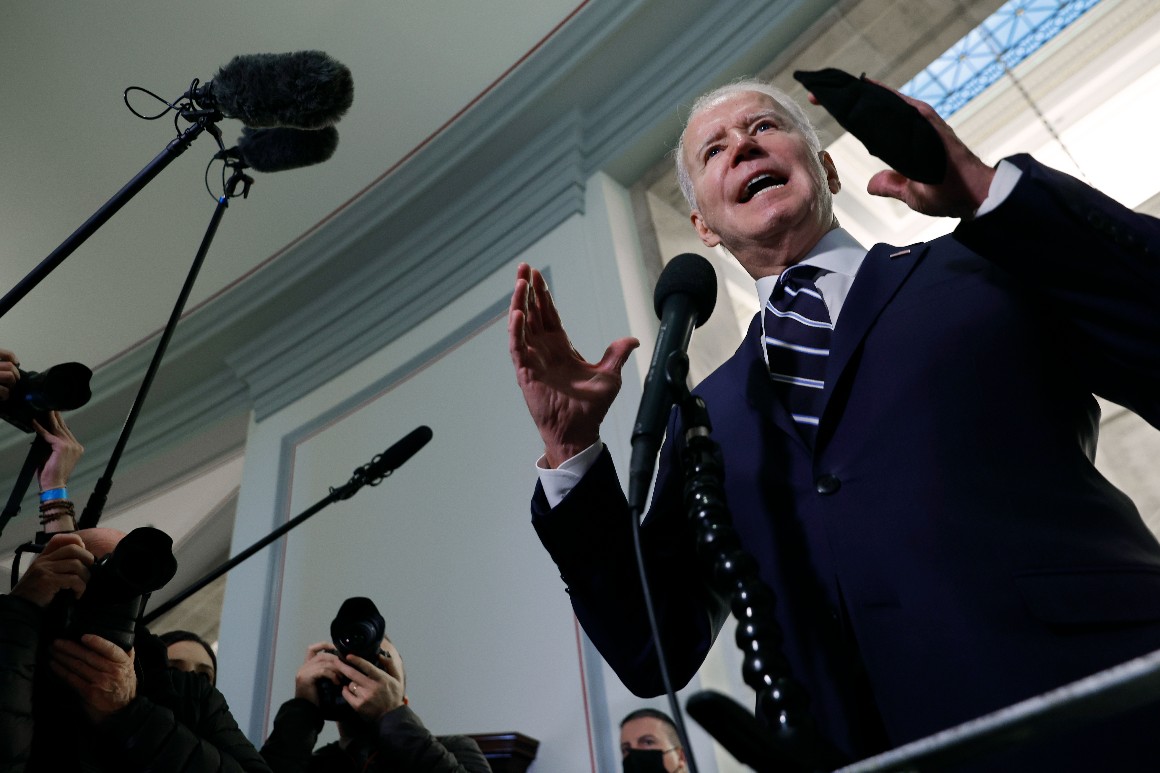 The bipartisan effort Biden steered clear of is, of course, the push to tighten up the Electoral Count Act, the muddled 140-year-old law setting out how Congress considers electoral votes from the states in presidential elections. Members of the Senate GOP leadership, most importantly Minority Leader Mitch McConnell, have expressed an interest in getting something done, while Sen. Angus King (I-Maine) has been working with Sen. Dick Durbin (D-Ill.) and Sen. Amy Klobuchar (D-Minn.) on a proposal.

No one, Republican or Democrat, should want a repeat of Donald Trumps attempt to exploit ambiguities in the Electoral Count Act to get the vice president to delay or change the count unilaterally. Yet, this simple imperative was not only absent from Bidens purportedly historic address; many Democrats have sounded positively hostile to the idea.

That Schumer professes to be offended by a proposal for a useful, incremental change that he could get to Bidens desk relatively easily tells you all you need to know about Democrats priorities. Biden was supposed to be the old legislative hand who could forge compromise on Capitol Hill as he worked assiduously to unify the country. Instead, after failing on his Build Back Better spending agenda, he is staking his credibility once again on a probably impossible legislative lift, even as he raises the stakes by saying our democracy depends on the Democrats voting proposals and by denouncing opponents of them as enemies.

It would be much more in keeping with the image Biden cultivated in the 2020 campaign to get in front of the parade on the Electoral Count Act, hail reforms to the law as the sort of consensus approach he promised, sign a bill at a ceremony with some Republicans present and hope the small-scale success bumps up his dismal approval rating a bit. It was once considered a cardinal rule of politics that success is better than failure. But on voting, the White House has once again put the accent on the almost-sure-to-fail over the likely-to-succeed.

Perhaps this would be defensible if Jim Crow 2.0, the term Biden has used for Republican voting laws, were really afoot in the land. Its not. Bidens case against Georgia in his speech was laughably weak.

The Georgia voting law that passed last year didnt make it more difficult to vote absentee; it asked voters to provide a drivers license number as a more reliable way to verify ballots (the prior method, signature match, had been reasonably criticized as too subjective). Its true that there will be fewer ballot drop boxes in the state going forward, but there will still be more than in any election prior to 2020, since they didnt exist before then. Finally, the infamous provision of Georgias law that forbids third-party groups from passing out food and water to voters standing in line is meant to prevent electioneering at the polls Georgia lawmakers got the idea from a similar rule in New York State.

Overall, Georgia has seen hugely robust turnout in recent elections. The League of Women Voters noted in the fall of 2020 that so many voters had already registered in the state that it was hard to find anyone new to sign up. This isnt what youd expect if the Peach State were really the harbinger of a new age of voter suppression.

Biden also complained in his speech of the new ability of Georgias State Election Board, an independent body with appointees from the state legislature, to take over county election boards. Perhaps the state board could use this authority to swoop in and change the vote tally in select counties after an election? Given that theres due process built into this mechanism there has to be an investigation, and the county has the ability to appeal to the courts its unlikely the state board could pull this off even if it wanted to.

This gets to a substantive objection to changing the Electoral Count Act, raised by well-meaning skeptics of the idea. If the law is changed to make it harder for Congress to object to a states electors, as proponents of reform on the right and left have suggested, wont that simply make it easier for state legislatures to rig vote counts without any pushback? Its appropriate to limit the role of Congress, though, to keep one party from ever again trying delay or monkey with the electoral vote counts without legitimate justification.

There are already substantial political and legal obstacles preventing state legislatures from disregarding election results. For one thing, if, after holding a popular vote on Election Day, a state legislature decided to choose its electors by a different method on a different day, that legislature would be in violation of the federal law that sets out when Election Day is. Various state laws stand in the way, as well. As we saw in the 2020 election controversy, the courts are also a bulwark against tossing or otherwise distorting election results.

A critical mass of Senate Republicans seems to be coalescing in support of changing the Electoral Count Act, in some fashion or other roughly 10 at this point, but it could conceivably become a couple of dozen. There are some complaints from the right about cooperating with Democrats at all, and Trump is likely to denounce any proposal which, of course, is largely aimed at him. Republicans shouldnt let him dissuade them, though, and should keep in mind that what Vice President Mike Pence was being urged to do yesterday might become a possibility for Vice President Kamala Harris tomorrow.

Changing the Electoral Count Act makes sense on its own terms, even if its unlikely that the exact same scenario we saw 2020 is going to repeat itself in 2024. All is flux, as the philosopher Heraclitus said. Indeed, given Bidens poor standing with voters and poor instincts on political strategy, as demonstrated once again this week, Democrats might have to start worrying less about Trump stealing the 2024 election from Biden (or some other Democrat) than about winning fair and square. American woman says she was gang-raped in hotel in...

Worker Absences in U.K. Fall in Sign of Omicron...

The Ashes: Mitchell Starc bowls Haseeb Hameed through the...

Florida teachers navigate their first year under the ‘Don’t...

EXPLAINER: What medical treatments do transgender youth get?

Australian Prime Minister to Call National Election for May...

Brandon Lewis: Ex-NI secretary’s term will be remembered as...

Theranos jury draws a line between hype and lies...

Chicago 5-month-old baby girl dies after being shot in...

Confederate marker fight may send SC and Charleston to...

Cuba anti-government protesters jailed for up to 30 years