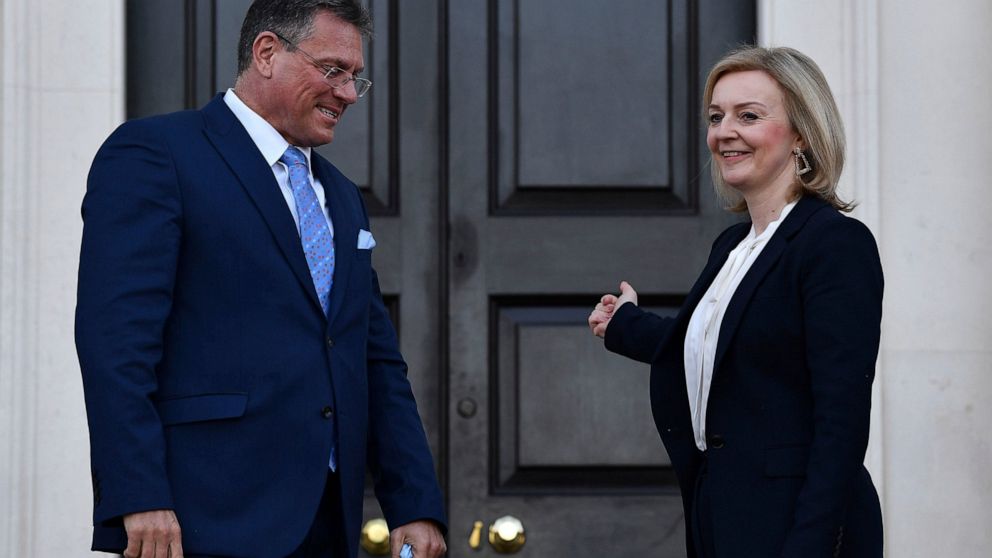 LONDON — U.K. Foreign Secretary Liz Truss called for Britain and the European Union to rebuild their relationship, as she and blocs top Brexit official met Thursday for talks on a thorny dispute over Northern Ireland trade.

Truss urged the EU to show a pragmatic approach to resolving problems that have soured the relationship since Britain left the 27-nation bloc last year.

As fellow believers in liberty and democracy, we should be capable of reaching an agreement that delivers for Northern Ireland and allows us to unleash the full potential of our relationship, she said.

Sefcovic said he wanted stability and predictability for Northern Ireland, the only part of the U.K. sharing a border with an EU member and where wrangling over post-Brexit rules has been centered.

As part of the divorce deal, the two sides agreed to keep Northern Ireland inside the EUs tariff-free single market for goods to maintain an open border on the island of Ireland a key pillar of Northern Irelands peace process.

That created a new customs border in the Irish Sea for goods entering Northern Ireland from the rest of the U.K. even though they are part of the same country. The arrangement has brought red tape and supply problems for some businesses, and it has angered Northern Irelands British Unionists, who say the checks undermine Northern Irelands place in the U.K. and destabilize the delicate political balance on which peace rests.

Brexit negotiations made limited progress under Frost, perceived by many EU officials as an intransigent hard-liner. Truss has struck a warmer tone and was welcoming Sefcovic with an all-British dinner of Scottish smoked salmon, Welsh lamb and Kent apple pie.

But Truss has so far stuck to Britains insistence that the EU remove its top court from its role in resolving any disputes over the Brexit agreement an idea the bloc flatly rejects.

The U.K. is seeking major changes to the arrangements and has threatened to use an emergency break clause to suspend parts of the legally binding Brexit divorce agreement if no solution is found. That would trigger EU retaliation and could spiral into a trade war between the U.K. and the 27-nation bloc.

The EU accuses Britain of failing to respond positively to its far-reaching proposals to ease the burden on Northern Ireland businesses.

Follow all AP stories on post-Brexit developments at https://apnews.com/hub/Brexit. Italy begins voting for next president with unclear slate

Parents sue over failures in child hearing service at...

Ukraine: Ben Wallace says UK is not preparing for...

Microsoft Defender for Endpoint wants to help your employees...

Ingraham: Here’s how Republicans can defeat Biden and radical...

French election: We can create a sovereign France –...

Ex-cop pleads guilty in rough arrest of woman with...

Opinion: The housing market is slowing down, but homes...

Former Oath Keeper spokesperson to appear as witness at...

Winona Ryder reflects on her breakup from Johnny Depp...

The Strange Case of Frank Morrissey

How Russia Is Using Tucker Carlson as a Propaganda...

Intel Alder Lake CPUs are now fixed for all...