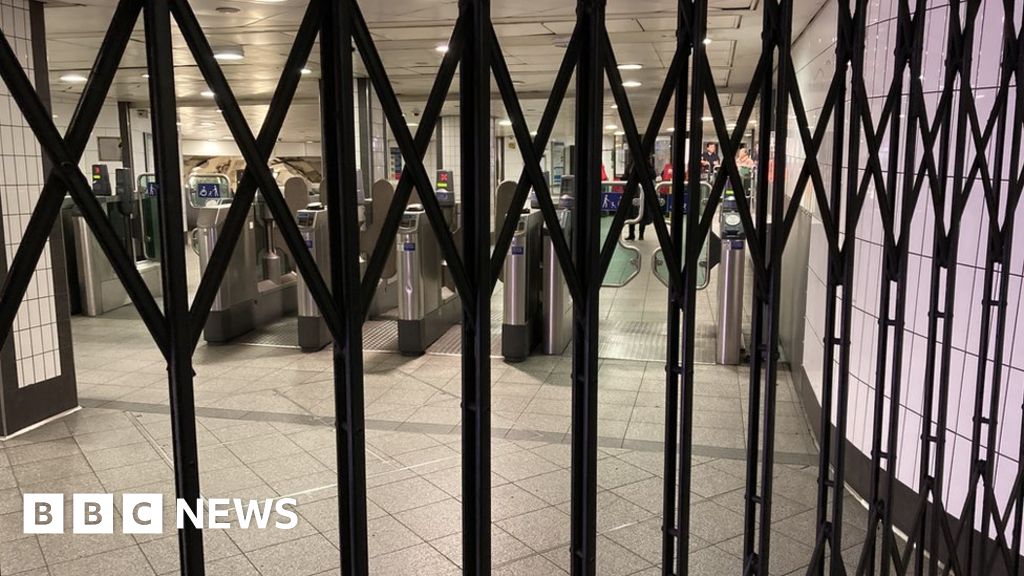 London Underground workers have voted to strike in a dispute over jobs, pensions and conditions.

The Rail, Maritime and Transport (RMT) Union said 94% of its members who took part in a ballot backed industrial action.

The dispute involves about 10,000 RMT members and is separate to the row over rosters on the Night Tube.

London Underground (LU) bosses say new plans will not result in job losses and they are working to avoid strikes.

The RMT said its members have been refused assurances on jobs, pensions and working conditions in the midst of an “on-going financial crisis” that it claims are driven by central government.

The union’s executive committee will consider the ballot result but said it would take “whatever action is necessary”.

RMT general secretary Mick Lynch said: “A financial crisis at LU has been deliberately engineered by the government to drive a cuts agenda, which would savage jobs, services, safety and threaten the working conditions and pensions of our members.

“It must never be forgotten that these are the same transport staff praised as heroes for carrying London through Covid for nearly two years, often at serious personal risk, who now have no option but to rise up and defend their livelihoods.”

Transport staff “would not pay the price” for a crisis not of their marking, he added.

Andy Lord, managing director of London Underground, said: “The devastating impact of the pandemic on TfL finances has made a programme of change urgently necessary and we have been working with our staff and trade union colleagues for a number of months as proposals are developed.

“Nobody has or will lose their jobs as a result of the proposals we have set out and there are no current plans to change the TfL pension or terms and conditions.”

He added that they are calling on the RMT to work with them to avoid industrial action. Can the GOP split Dems again on gun amendment?

Presented by American Civil Liberties Union THE MTR OF GUN BILLS PAST: House Democrats are poised to vote today on two bills that aim...
Read more

Chicago’s top cop is pleading with the city’s criminals to "stay away from children" after a violent weekend that left several children wounded, including a 4-year-old boy who was fatally struck by a stray bullet while getting his haircut inside his home.
Read more

Data on thousands of pregnant women in Scotland shows those who didn't get vaccinated were more likely to end up hospitalized in critical care or have a stillbirth.
Read more

Germany wants to exit Lufthansa stake as soon as...

Senate to ramp up work on Biden’s judicial nominees

Young members of the Fort Belknap Indian Community are learning how to identify and save local grasses as part of an effort to restore the land.
Read more

Shortly ahead of sending a new three-person crew to its space station, China has renewed its commitment to international cooperation in the peaceful use of space
Read more

Barely anyone has upgraded to Windows 11, survey claims

Windows 11 is seeing low adoption rates from businesses and consumers even though it's available as a free upgrade.
Read more

Melvyn Bragg and guests discuss the collection of poems published in 1609 by Thomas Thorpe: Shakespeare’s Sonnets, “never before imprinted”. Yet, while some of Shakespeare's other poems and many of his plays were often reprinted in his lifetime, the Sonnets w…
Read more

Prince Philip: World leaders react to death of the...

Condolence messages to the Duke of Edinburgh's family pour in from around the world.
Read more

EPA bans use of pesticide linked to developmental problems...

The Environmental Protection Agency (EPA) has decided to ban the use of a pesticide that has been linked to developmental issues in children for all foods. In a statement on Wednesday, the agency...
Read more

England's 20-year-old full-back Freddie Steward gives the lowdown on high balls and superstar team-mates ahead of Saturday's visit of the Springboks.
Read more

Patrick Cantlay, Who Paired With Jon Rahm a Day...

Rahm had to withdraw from the tournament after 54 holes with a positive COVID test and 6-shot lead. His two playing partners finished first and third for the tournament.
Read more

As COP26 Nears, the Toughest Goals Are Still Out...

There’s progress on carbon-market talks, but an agreement to phase out coal is looking increasingly unlikely.
Read more

I Am Legend screenwriter dismisses anti-vax claims based on...

After a week of diplomatic talks ended with no progress, there are fears a Russian attack on Ukraine may become more likely.
Read more

The coolest outdoor accessories at Target that will make...

Two recently identified Indiana brothers who died during the attack on Pearl Harbor were finally laid to rest with gravestones after nearly 80 years as "unknown" soldiers.
Read more

The Biden administration is expected to unveil new Belarus sanctions and a new executive order amid continued crackdowns by the regime of strongman leader Alexander Lukashenko.
Read more

James Ford was jailed for life in 2004 after admitting to murdering Amanda Champion in Kent.
Read more

Are the homeless being targeted in Atlanta?

Two homeless men were shot in their sleep, three days apart. Police say the killer likely didn't know who the men were at the time of the murders. 48 Hours Crimesider reporter Michelle Sigona joins CBSN with more on the search for a suspect who is apparently …
Read more

MLB umpire Angel Hernandez was at the center of controversy again on Wednesday night, as he ejected three Kansas City Royals.
Read more

Canada’s Trudeau says he discussed border with Biden, but...

Canadian Prime Minister Justin Trudeau said on Sunday he has spoken with U.S. President Joe Biden about how to lift pandemic-related border restrictions between the two countries but made clear no breakthrough has been achieved.
Read more

What will Nintendo do after the Switch OLED? We...

Nintendo can be impossible to predict, so we asked a Magic 8-Ball to shine some light on what the Kyoto-based company might do next.
Read more

Bloomberg Best features the best stories of the day from Bloomberg Radio, Bloomberg Television, and over 150 Bloomberg News bureaus around the world.
Read more

The university president said earlier that​ a student died in storms on his graduation day.
Read more

Uber Says Its UK Drivers Are ‘Workers,’ but Not...

The ride-hail giant shifts its stand following a court ruling, part of a global push for a “third category” of workers.
Read more

TheMarket now has 5% off all Apple products, with discounts available from December 3-6.
Read more

2 indicted in connection with Atlanta shooting death of...

00:00Give us your take on what happened it was rather historic but Inote that neither party really got more than about 26 percent. ...
Read more

MacBook Pro notch is getting a lot of hate...

When Apple showed off its new MacBook Pros, many people were disappointed to see a new ‘notch’ around the improved webcam – but will Apple be worried about people’s complaints?
Read more

Kinzinger: GOP downplaying Capitol riot something ‘out of North...

Analysis: Biden’s rhetoric and the reality on the ground...

President Biden spoke Friday about the evacuations currently underway in Afghanistan, saying progress is being made. CBS News chief Washington correspondent Major Garrett spoke with Omar Villafranca on CBSN to break down the president's most recent remarks.
Read more

U.S. Secretary of Commerce Gina Raimondo on Sunday said that passage of the bipartisan infrastructure bill is "very close.""We're in the final strokes. We're in the final days. We're optimistic. We are all engaging...
Read more

The documents include thousands of pages of never-before-seen investigative memos, notes and cables.
Read more

Calls for ‘reasoned debate’ over oil and gas future

Breonna Taylor was shot inside her home in the early hours of March 13, 2020.
Read more

The justices granted a request the Justice Department made under President Donald Trump to restore the death penalty against bomber Dzhokhar Tsarnaev.
Read more

The University of Connecticut settled a federal Title IX lawsuit and will keep its women's rowing program for a minimum of five years.As part of the settlement, the university will also renovate ...
Read more

“They’re still in a state of shock and can’t believe it.” Afghanistan's national girls' soccer team has made it to Lisbon, Portugal. Female athletes are fleeing the country as the Taliban bars women in sports https://bloom.bg/3nXmDIa (Source: Quicktake)
Read more

‘Kevin Can F**k Himself’ and ‘Physical’ feature different spins...

Desperate housewives stand front and center in a pair of new series, "Kevin Can F**k Himself" and "Physical," with the former offering the more intriguing template, in part because of its satiric take on the long history of beleaguered sitcom wives.
Read more

Ontario to lift lockdown on dining rooms and gyms

Canada’s largest province is ending a lockdown of restaurant dining rooms, gyms and cinemas at the end of the month
Read more

FBI to help school employees amid uptick in violence

BioNTech Is Working on an Omicron Version of Its...

BioNTech SE is working to adapt its Covid-19 vaccine to address the omicron variant and expects to have a new version ready within 100 days if necessary.
Read more

Manchester City sign Sweden midfielder Filippa Angeldahl from BK Hacken on a two-year deal, with an option for a further year.
Read more

The sow, named Matilda, escaped from a farm and gave birth in woodland.
Read more

The Equalities and Human Rights Commission says the LGTB group's scheme is not "best value for money".
Read more