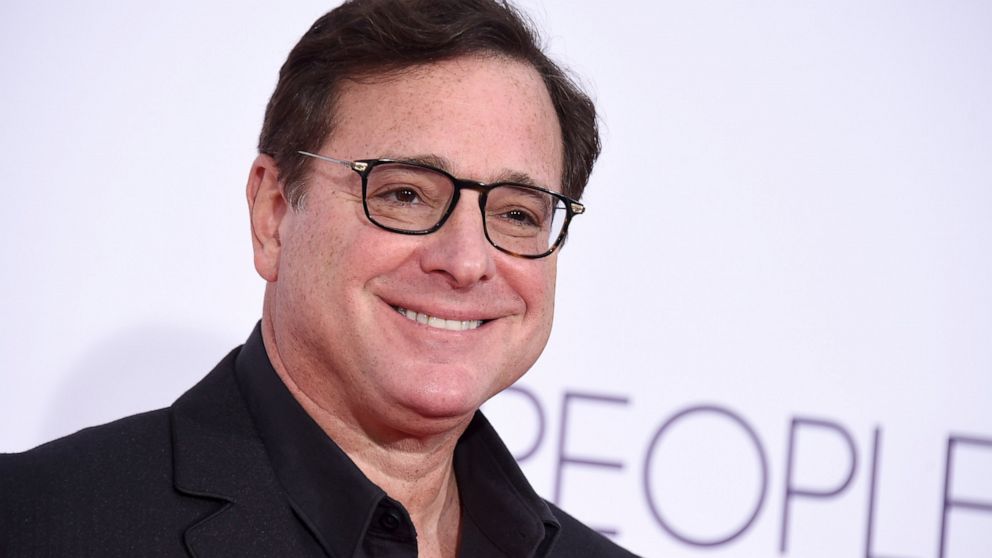 ORLANDO, Fla. — Comedian and actor Bob Saget was found dead lying face up on his bed in a luxury hotel room in Florida with no signs of trauma, according to an sheriff’s office report released Monday.

There were no signs of foul play, and the room itself was in order, with items owned by Mr. Saget on the nightstand, television stand, closet and bathroom,” according to the report from the Orange County Sheriff’s Office.

Saget’s left arm was across his chest and his right arm was resting on his bed when deputies and paramedics arrived Sunday at his room at the Ritz Carlton in Orlando and pronounced him dead, the report said.

Saget had been scheduled to check out of his room on Sunday, and when family members were unable to get in touch with him, they contacted the hotel’s security team, which sent a security officer to his room, the report said.

When the security officer, Jody Lee Harrison, entered the room, all the lights were off. He found Saget on the bed, cold to the touch. yellow and clammy,” Harrison told deputies, according to the report.

Harrison checked Saget for breathing and a pulse, and when he found none, he had the hotel’s security dispatch call 911, the report said.

Saget was best known for his role as beloved single dad Danny Tanner on the sitcom Full House and as the wisecracking host of Americas Funniest Home Videos.” He was 65. Watch highlights as England force the follow-on and put pressure on India, before rain halts their challenge for victory in the one-off Test at The Bristol County Ground.
Read more

As online abuse becomes the main form of venting, many worry about the toxicity cricketers face on social media.
Read more

A closely watched gauge of U.S. service sector activity hit a record high in March as the recovery from the COVID-19 pandemic kicked into another gear, according to a report released Monday.The I...
Read more

A new feature called HDR10+ Gaming will automatically calibrate your screen when starting a game and turn on VRR.
Read more

India’s government has blocked Mother Teresa’s charity from receiving foreign funds, saying the Catholic organization did not meet conditions under local laws, dealing a blow to one of the most prominent groups running shelters for the poor
Read more

‘Where Is Our Governor?’: Florida Mayor Rips Ron DeSantis...

"When is the last time you saw the governor do a press briefing on COVID-19?" Orange County Mayor Jerry Demings said.
Read more

Two foreign athletes in the 2022 Beijing Winter Olympics have tested positive for COVID-19, according to organizers of the February Winter Games in China.The athletes are among a crowd of 1,500 who have come into t...
Read more

Linux on Apple M1 silicon is right around the...

Asahi Linux has sent in a pull request to merge its port with the mainline kernel.
Read more

Law changes how prisoners are counted in redistricting

Good Monday morning! When New Jersey redraws its congressional districts, prison inmates will be considered as residents of their hometowns -- not where...
Read more

General Motors Co. and Lockheed Martin Corp. are teaming up to develop a new lunar rover for the next time NASA has astronauts motoring around the moon.
Read more

Support for adaptive triggers has arrived, following its debut with Metro Exodus: Enhanced Edition a couple of months back.
Read more

The man died at the scene following a collision involving a Nissan Qashqui on the A70 near Ayr.
Read more

Boris Johnson’s administration plans to push through new government procurement rules by the end of the year, replacing what it sees as excessively “complex” procedures it was tied to in the European Union.
Read more

The Sony SRS-RA5000 is one of the first Sony 360 Reality Audio speakers on the market. But can it justify its premium price point?
Read more

The government again promises a ban - but campaigners say it needs to set a date.
Read more

On a drive to visit David Biro in prison, Bishop discusses why she makes that trip, and why these visits are important and restorative -- for both of them.
Read more

Two more Hong Kong universities on Friday removed public monuments to the 1989 Tiananmen protests in Beijing, following on the heels of the dismantling of a sculpture marking victims of the crackdown at another university earlier this week.
Read more

Russia stands open for "the development of our ties on the basis of mutual respect and with the emphasis on cooperation in areas such as the Arctic issues, relations between regions and business ties where our interests objectively converge," said a spokeswom…
Read more

We're not far away from a major unveiling of hardware and software from Huawei, if rumors are to be believed.
Read more

Aaron Rodgers fined by NFL for not following COVID-19...

The Art Institute of Chicago fired all of its trained volunteers and guides last month, who were mostly older White women, in order to diversify its team.
Read more

Victoria Justice Is The Afterlife Of The Party

Victoria Justice, former 'Victorious' star, is taking away a newfound sense of home — and one cool T-shirt — from her latest film 'Afterlife of the Party.'
Read more

Bought a new Amazon Kindle in the Prime Day...

I just filled up my Amazon Kindle Oasis without spending a penny, and it's pretty easy for you to do so, too.
Read more

Last year marked the deadliest for line-of-duty police and law enforcement officers since 1930, with 458 officers dying in 2021.
Read more

Angie Hopston, from Claverley, did not know her leg was broken until after the race.
Read more

Top Republicans in other states say they are examining how the Texas law’s unique “private right of action” enforcement structure could be used for similar abortion bans.
Read more

ASU students to protest Rittenhouse as a possible student

Six-Time UFC Champion Randy Couture on the Importance of...

On the Proud American Podcast, we try to bring you stories and perspectives of Americans who are not only proud of their accomplishments, but humble in their work. People who embody selflessness, hard work, dedication, commitment and resilience. Today’s guest…
Read more

Four days after Hurricane Ida struck, the storm's aftermath and progress in recovering from it are being felt unevenly across Louisiana
Read more

Chris Wallace questioned the CDC director over whether the change came as the result of political "pressure."
Read more

Ukrainian president accuses group of planning coup for next...

Ukrainian President Volodymyr Zelensky has accused a group of individuals of planning to stage a coup next week.Zelensky warned of "internal challenges" facing Ukraine, beyond the growing tension...
Read more

Will Executives Lead on the Fight Against Climate Change?

This Observatory Will Help Reveal the Shape of the...

Opening next year, the Vera Rubin Observatory can show how dark matter affects the evolution of galaxies.
Read more

NFL not planning to issue report on Washington Football...

The NFL is not going to issue a report on its 10-month investigation into allegations the Washington Football Team engaged in harassment and abuse because of its promise to protect the identities of those who testified, Commissioner Roger Goodell said on Tues…
Read more

As attorneys in the trial of a former Minneapolis police officer charged in George Floyd’s death screen potential jurors, they’re on guard for anything that suggests jurors would help, or hurt, their side
Read more

More than 1,500 police were deployed to the streets of Sydney on Saturday and rideshares and some public transport routes to the city's downtown were blocked to prevent a planned anti-lockdown protest.
Read more

“I literally would not have the role I have today had it not been for Disney Dreamers Academy,” says Princeton Parker, a stage manager for Food & Beverage at Disney California Adventure Park. In six years as a cast member, Princeton’s worn many hats, includin…
Read more

"My heart was beating so fast, and I was so flustered and my face was so red," the woman said in a video following the stressful encounter.
Read more

The show is so massive this year that it can't be contained to a single night. It all kicks off Sunday, May 16
Read more

The footballer believes his experiences on the pitch will translate to the online world.
Read more

As many as 7% of French firms could be in financial trouble when the government rolls back the blanket support it has provided during the pandemic, according to research by Bank of France economists.
Read more

Online fashion retailer ASOS reported a 36% rise in full-year profit on Monday after seeing exceptional demand in its home British market, but added that supply chain pressures and higher costs would weigh on its 2022 outcome.
Read more

From Lady Gaga to Maroon 5, here are some...

As the Covid-19 pandemic subsides, artists are slowly getting back on stage to perform in front of live audiences again.
Read more

In the past 10 years, charities have made splashy fundraising appeals and raked in billions in donations on GivingTuesday, which takes place the first Tuesday after Thanksgiving
Read more

Teams in the inaugural Rainbow Cup will be able to replace dismissed players under trial laws being brought in for the tournament.
Read more

Pokemon Unite launches on mobile today, but you might...

With 5 million potential day-one players, Pokemon Unite on Android and iOS might be pretty hard to play.
Read more

Coronavirus: Why some mosques are closed to women during...

Ramadan is marked by Muslims worldwide - but some UK mosques aren't letting women in.
Read more

Two-time Pulitzer Prize winner Colson Whitehead is out with a new book, “Harlem Shuffle,” a loving tribute to hard-boiled crime fiction set in Harlem in the early 1960s
Read more

After 12 years, Ronaldo is going back to Old Trafford, where he achieved success as a young player.
Read more

Ten charity workers were killed and 16 others were wounded in Afghanistan when gunmen opened fire on a mine-clearing organization that's been working in the country for decades.The HALO Trust said in a statement We...
Read more

Why DevSecOps is essential to boost business innovation

DevOps isn’t new and it means something different to just about every business.
Read more

WhatsApp is planning a big improvement to its photo...

WhatsApp is testing a new feature that could make it much easier to share high-quality photos on the messaging app.
Read more

Don Brown, now a retired detective from the Brevard County Sheriff's Office in Florida, was the lead investigator in the Amy Gellert murder over 20 years ago. He tells "48 Hours" about what happened the night of Gellert's murder and how the killer got away.
Read more

Covid vaccine will not be compulsory for uni lectures

China finds explanation for "mystery hut" spotted on the moon