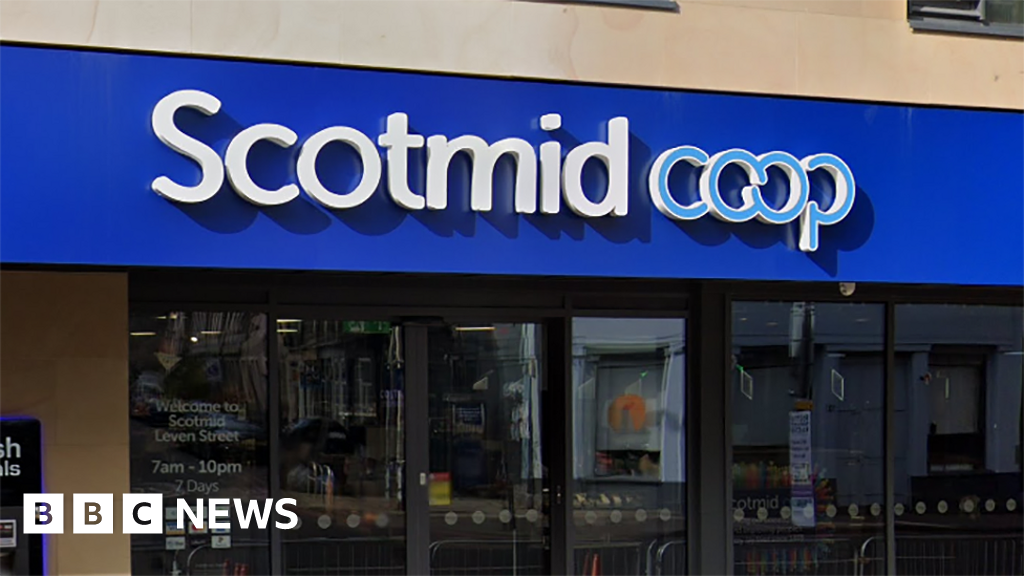 Image caption, The shop worker was abducted and forced to open the Scotmid store on Leven Street

Two thieves abducted a shop worker on an Edinburgh street, and forced him to return to his store and hand over a four figure sum of cash.

The 24-year-old was bundled into a car in Spey Street at 22:45 on Thursday after his shift at a Scotmid shop.

He was driven more than three miles back to the store on Leven Street in a blue Volkswagen Tiguan.

The men threatened him and forced him to give access to the premises. Police said it was a “frightening” incident.

Det Insp Kevin Tait, of Police Scotland said: “We believe this was a targeted attack and that those responsible had been following the victim prior to approaching him and forcing him to allow them entry to his place of work.

“While this was a very frightening experience for him, thankfully he was uninjured and we are now pursuing a number of lines of inquiry to trace the suspects.

The Volkswagen Tiguan was later found on fire in Edinburgh’s Lochend Park.

Police said it had been stolen from Maybury Car Sales in Turnhouse Road on 12 December. The former California home of a defense witness in the Derek Chauvin murder trial was vandalized with a pig's head and blood smears most likely tied to his testimony from the trial, police said.
Read more

Crypto M&A Set to Notch Record After Doubling in...

Deal activity in the cryptocurrency sector soared in 2020 and is likely to keep climbing this year, according to a report.
Read more

Prince Charles on Prince Philip: ‘My family and I...

Prince Charles said his father "would have been amazed by... the touching things that have been said".
Read more

"Parents of transgender children ... now realize their kids' lives and dignity were used as a legislative bargaining chip," a state LGBTQ organization said about the legislator's actions.
Read more

At least two dead after plane crashes near high...

A plane crash near a high school inSantee, Calif. left at least two people dead and two homes destroyed, according to local news reports.A twin-engine plane crashed into at least one home before striking a box truc...
Read more

Five Midwest states announced Thursday that they will work together to increase  the deployment of electric vehicle charging stations.A memorandum of understanding signed by the governors of Illinois, Indiana...
Read more

Slovakia’s Health Minister has stepped down in a deal to defuse a political crisis over the acquisition of a Russian vaccine, which had threatened to topple the coalition government
Read more

Here's how the Milwaukee Bucks have celebrated becoming NBA champions, including Giannis Antetokounmpo taking the trophy to a chicken shop.
Read more

What checks were made on PPE contracts?

One city trader with no experience in PPE deals, was given an £880,000 contract from the government.
Read more

November has begun, so we end with a look at Bats in Truth or Consequences, New Mexico, where more than a million bats are heading for their big night out. Videographer: Valarie D'Elia.
Read more

A new report lends extra weight to rumors of an always-on iPhone 13 display, a feature borrowed from the Apple Watch and generations of Android devices.
Read more

The dollar steadied on Monday after its steepest weekly loss in more than a month, as traders weigh the effect of inflation on the relative pace of looming rate hikes - with a wary eye on U.S. growth data and a European Central Bank meeting.
Read more

Steve Hilton: How does Anthony Fauci still have a...

NI scientists are playing their part in the global response to understanding Covid-19.
Read more

Fred West: Who was he and what did he...

Police begin to excavate a cafe for a suspected victim of the serial killer, but who was he?
Read more

There's some good news if you'd like to see Samsung revisit this flagship phone series sometime in 2022.
Read more

Bitcoin’s Volatility Is Spilling Over to U.S. Stocks, Study...

China’s target to vaccinate 560 million people -- 40% of its population -- by the end of June is hampered by a supply shortage, forcing health authorities to extend the intervals between doses, and leaving some people unable to book second shots.
Read more

This has already been an active hurricane season, and the Federal Emergency Management Agency is busy reinforcing its preparations as we approach the peak. FEMA Administrator Deanne Criswell joins CBSN to discuss those efforts, how the agency is responding to…
Read more

The Beatles' manager Brian Epstein was an influential presence for the band as shown in "The Beatles: Get Back" until his death in 1967. He was 32-years-old.
Read more

Europe urges unity on Taliban but is quiet on...

The legislation will make it hard for LGBTQ people to live in the country, MEP Katalin Cseh says.
Read more

A Thai man describes what it is like working in southern Israel when militants in Gaza fire rockets.
Read more

US to require foreign travelers to be vaccinated when...

The Biden administration is currently developing a plan that would require most international travelers entering the U.S. from all countries to be fully vaccinated against COVID-19, a White House official said Wednesday....
Read more

Firefighters have spent more than 12 hours dousing the flames caused by an explosion from a container ship in Jebel Ali port in Dubai. Fireboats were seen spraying water on the Ocean...
Read more

Russia in showdown with UN and West over aid...

Russia has previewed a showdown with the United Nations, United States and Western nations Wednesday over the delivery of humanitarian aid to rebel-held northwest Syria from Turkey
Read more

U.S. Education Secretary Miguel Cardona on Sunday signaled his resolve to maintain in-person learning amid the most recent surge in COVID-19 cases due to the omicron variant, but acknowledged there will likely be some "bu...
Read more

On this Memorial Day weekend, we bring you some wisdom--and humor--from this year's commencement speeches. From President Obama to Broadway star Lin-Manuel Miranda to House Speaker Paul Ryan, leaders share lessons learned with the next generation.
Read more

Biden: US will be in ‘very different position’ by...

President Biden predicted Monday that the United States would be in a "very different position" by the end of the summer when it comes to the number of Americans vaccinated against the novel coronavirus....
Read more

THE BUZZ: A recall to decide the fate of Gov. Gavin Newsom has looked all but certain to go before voters for some...
Read more

Former Food and Drug Administration (FDA) Commissioner Scott Gottlieb said on Sunday that the U.S. is likely undercounting the number of COVID-19 cases because some infected younger and healthier people are experien...
Read more

A tiny bat that flew 2,018 kilometers (1,254 miles) from Britain to Russia is being hailed as a mini-Olympian by scientists who hope her flight will teach them more about how climate change is affecting the species
Read more

Florida to feds: Allow cruise ships to operate or...

Florida is threatening to sue the federal government if it doesn't lift its pandemic ban on cruise lines using U.S. ports
Read more

With eye on Iran, Israeli navy steps up Red...

The Viewsonic M1+ boasts good picture quality and audio performance, but the dim output may be disappointing to some.
Read more

Heart of Midlothian suffering from ‘severe lack of leadership’...

Hearts are being plagued by "a severe lack of leadership" at boardroom level, insists former captain Steven Pressley.
Read more

The Chicago Teachers Union and school officials are expected to make a deal soon after the union voted to return to remote teaching.
Read more

Strong Quake Hits Off Coast of North Japan, No...

India launches effort to inoculate all adults against COVID

Covid vaccine: Can US troops be punished for refusing...

The US military has said that America's 2.1 million soldiers and sailors must all get the vaccine.
Read more

List prices for the latest Nvidia RTX and AMD Radeon graphics cards are finally plummeting, but you might be wise to wait a while longer.
Read more

Fewer babies named Karen than ever before

Say goodbye to Karen for a generation.
Read more

Felipe Mora and Santiago Moreno scored and the Portland Timbers advanced to the MLS Cup final with a 2-0 victory over Real Salt Lake in the Western Conference final on Saturday.
Read more

Role of social media being investigated in swarming business...

Powell Gets Unlikely Boost With His Liberal Critics in...

Liberal Democrats are publicly assailing Federal Reserve Chairman Jerome Powell’s record in an effort to persuade President Joe Biden not to give him a second term, but they aren’t yet lining up behind any one alternative to run the central bank.
Read more

A quarter of holiday shoppers say they plan to start as early as this month amid ongoing shipping uncertainty.
Read more

Facebook Is Willing to Open Algorithms to Regulators, Clegg...

Facebook’s chief spokesman said the company is willing to subject itself to greater oversight to ensure its algorithms are performing as intended and aren’t harming users.
Read more

Hungarians will go to the polls on April 3 to decide whether Viktor Orban should win a fourth consecutive term as prime minister, prolonging his running battle with the European Union over democratic values.
Read more

LaTurbo Avedon Is Way Ahead of the Metaverse

The artist, who only exists online, was working in digital spaces long before anyone talked about NFTs.
Read more

Billions of Wi-Fi and Bluetooth devices vulnerable to password...

Researchers have discovered a way to use shared resources on SoCs as bridges to launch lateral privilege escalation attacks.
Read more

Debate over explicit memoir becomes a focus of GOP...

The Latest: Vaccines to be required for Albania lawmakers

Twitch streamers are planning to hold a one-day blackout in hopes of raising awareness of a practice called "hate-raids," ...
Read more

Bitcoin (BTC) Is Off to Worst Annual Start Since the Dawn of...