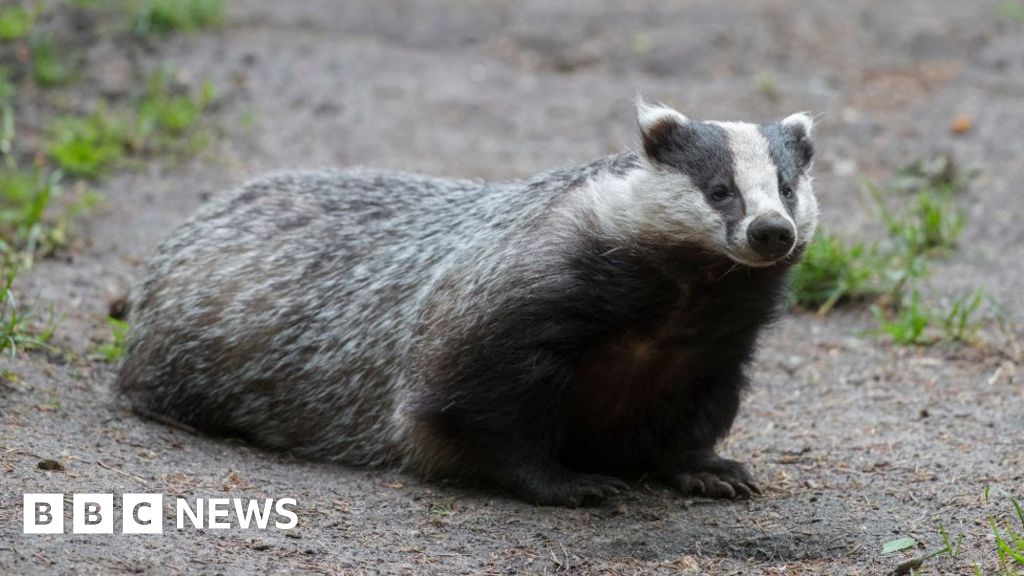 Image caption, It is thought that the badger was searching for berries and worms to eat when it uncovered the treasure

A hungry badger is thought to have unearthed the largest collection of Roman coins ever to have been discovered in northern Spain, reports say.

The treasure trove was discovered close to the den of an animal in the municipality of Grado, Asturias.

The animal is thought to have uncovered the treasure as it desperately searched for food last winter, a harsh one.

In a desperate attempt to find some food, it is thought that the animal – which researchers believe could be a badger – inserted its legs into a small crack opening next to its refuge.

But it found no use for the old coins and abandoned some of the pieces in front of its den.

The 209 pieces were then found by two archaeologists when they went to visit the cave of La Cuesta with a local resident, according to a report recently published in an archaeological journal.

The collection of rough coins turned out to be an “exceptional find” dating from between the 3rd and 5th Centuries AD.

The coins are thought to have been forged in places as far away as Constantinople (present day Istanbul, Turkey) and Thessaloniki, Greece, according to one of the researchers who spoke to Spanish newspaper El País.

Researchers added it was the largest treasure trove of Roman coins found in a cave in northern Spain to date.

Other treasures have been found in the dense woodlands of Grado. In the 1930s, 14 gold coins dating to the reign of Constantine I, a Roman emperor who reigned from 306 to 337 AD, were also found in the area, El País says.

The research project, funded by the cultural department of the province of Asturias, is in its first stage, and researchers hope to return to the area to do more excavating.

But for now, only the badger knows whether there is more treasure to find. German Inflation Climbs to Highest Since 2018 as Lockdown...

Organizations often respond to an employee’s cyber screw-up by blaming and shaming the person, no matter how honest the mistake. The assumption is that the employee will exercise more care in the future to avoid a repeat experience.
Read more

Widow calls on Sturgeon to act over husband’s hospital...

Spain’s Suarez Navarro gets Olympics ticket in bid to...

Carla Suarez Navarro is one among eight Spaniards selected to compete at the Olympic Games in Tokyo next month, the Royal Spanish Tennis Federation has said, giving the veteran player a fitting farewell before her retirement.
Read more

Four Members of Neo-Nazi Forum Charged With Conspiracy to...

Microsoft Excel can now do your job for you…yes...

Microsoft Office Scripts is now eligible for all users, so you can finally automate the boring bits of your day-to-day tasks.
Read more

The South Carolina lawmaker told Fox News the top Senate Republican must have a "working relationship" with the former president.
Read more

Lars Vilks lived under police protection and constant threat, including from al Qaeda, after his depiction of the Muslim prophet.
Read more

At the start of 2021, Britain's disastrous handling of the Covid crisis had earned it a reputation as "plague island." Just weeks later, the success of its vaccination program is leading to a an "all-out war" between European destinations eager to tempt inocu…
Read more

A New York cop had a lot more than...

As New York City became inundated with record rainfall earlier this month and dozens found themselves in danger of drowning, a pair of police officers made sure a stranded driver in the middle of Central Park would make it out alive.
Read more

Former Vice President Mike Pence on Thursday offered his most extensive comments to date on the Jan. 6 Capitol riots, calling it a "dark" and "tragic" day in history, but accused Democrats of using the events that day to...
Read more

Former PM Tony Blair: ‘It’s not just about the...

Wisconsin lawmaker asks for prayers for colleague with COVID

The office of a Wisconsin lawmaker who has been an outspoken critic of vaccine and mask mandates has declined to update his condition, even as a fellow legislator asked for prayers, saying the state senator was hospitalized with COVID-19-induced pneumonia
Read more

The baby boy was found wrapped in a blanket by a passer-by in Kings Norton and taken to hospital.
Read more

Intel could bring out new GPUs every year to...

Intel looks to be aiming the big GPU guns at its rivals, especially when you consider recent rumors around pricing.
Read more

Israel Goes to the Polls for Fourth Election in...

Israelis are voting in what's set to be a tightly-contested election as a successful vaccine rollout fails to give incumbent leader Benjamin Netanyahu a clear edge. Polls show neither Netanyahu, who has faced corruption charges, nor any of his rivals securely…
Read more

Michigan man charged in assault on officers in Capitol...

A 41-year-old Michigan man has been arrested and accused of using chemical spray on law enforcement officers as part of a mob that stormed the U.S. Capitol on Jan. 6
Read more

A Los Angeles 2-year-old wowed her parents when she began speaking in full sentences and learning the periodic table. Now, she's being recognized for her uncanny intelligence. Caitlin O'Kane tells us more.
Read more

The Full House star was found dead in his hotel room in Orlando, where he was on tour, police say.
Read more

"We believe the risks of infections inside venues would be lowest by holding the event with no fans," the experts said in a report to Olympics organizers.
Read more

Trust in the news increased worldwide during the coronavirus pandemic, according to a report published Wednesday.The Reuters Institute Digital News Report 2021 said trust in the news has grown by...
Read more

The U.S. is expanding COVID-19 boosters, opening a third dose of Pfizer's vaccine to people as young as age 16
Read more

Presented by Unite Us Good Tuesday morning! Middlesex County Democrats, come January the states most powerful legislative delegation, are trying to help out one of...
Read more

Beadnell: The coastal idyll with a lack of affordable...

In the summer Beadnell booms but it falls silent in winter with empty second homes.
Read more

The Supreme Court said Wednesday that California cannot allow unions to enter the private property of agricultural businesses to address workers unless the businesses are compensated for the visit, in a case that could have broad property rights implications.
Read more

Josh Heupel has two perspectives when it comes to SEC expansion, both of which are valuable.
Read more

Tory Burch gives Charlie Rose a present in the...

Money Stuff: Banks Don’t Want to Be Paid Back...

Republicans welcome the chance to work with Democrats on...

I hope that my counterparts in the majority will work in good faith with Republicans to address our priorities for a highway bill, so we can find a compromise that both sides can support, like we have on many other infrastructure proposals.
Read more

The top U.S. infectious disease expert, Anthony Fauci, warned that the nation is moving in the “wrong direction” in combating a new wave of the pandemic as vaccinations slow, and said a booster shot may be needed especially for the most vulnerable.
Read more

The owner of The Cosmopolitan of Las Vegas is selling the 3,000-room Las Vegas Strip hotel in a $5.65 billion deal
Read more

Presented by Pre-K Our Way Good Thursday morning! Its looking highly unlikely that there will be a bipartisan 9/11-style commission to examine Jan. 6. Republicans...
Read more

The Ashes: Joe Root surprises Usman Khawaja with a...

"What we won't do is teach our children to view everything through a lens of race," Youngkin told supporters at a rally.
Read more

Nearly two weeks since the Christmas parade attack in Waukesha, small business owners and employees describe a community that has come together.
Read more

Matthew McConaughey says he's seriously weighing a gubernatorial run in his home state of Texas.The "True Detective" actor, who's publicly flirted with a political bid before, went a step further in an episode of C...
Read more

Sen. Ted Cruz, the son of a Cuban immigrant, took to Twitter on Sunday in support of the thousands of protesters that took to the streets in Havana to rail against the worsening conditions in the communist country.
Read more

The audit report urged the Justice Department to "carefully reassess" the lack of body cameras and take steps to implement their use.
Read more

Robbie-Lee Selway, 21, died in the crash, which left four others injured.
Read more

5 ways to make your next smartphone as eco-friendly...

How to ensure your next smartphone pick is as eco-friendly as possible.
Read more

A carjacking in New Orleans has resulted in the loss of one married couple’s 50-year-old wedding album.
Read more

A shooting inside a food court at a Philadelphia mall on Monday left one person dead, according to the Philadelphia Police Department.The incident occurred at approximately 5:05 p.m. at the entra...
Read more

The president signs a decree aimed at requiring firms to provide "just cause" before removing posts.
Read more

Minnesota AG says he ‘felt a little bad’ for...

If another Roku outage impacts your Roku smart TV here's how you can get around the problem and get some use out of the screen.
Read more

The cause of the fire remains under investigation, police say.
Read more

Zillow Losses Lead To Shut Down Of Flipping Business...

Dozens of Democratic lawmakers on Friday demanded the Biden administration to reopen a federal investigation into the death of Tamir Rice, who was fatally shot by police in 2014 when he was 12 ...
Read more

Ucraft is so confident with their service that they offer a free option as well as a 14-day trial for its more full featured plans.
Read more

Rough sleeping: ‘New Year reminds me what my life...

Rough sleeper Mark says seeing people celebrate makes him feel like he is not "part of society".
Read more

Police in Brooklyn Center say an officer fired after a stopped driver drove away. Protests followed — with the Derek Chauvin trial about to enter week three.
Read more

Shane Duffy spares the Republic of Ireland's blushes with a late header to earn a World Cup qualifying draw with Azerbaijan in Dublin.
Read more

The added jobs signal a sustained recovery from the pandemic recession is taking hold as vaccinations accelerate and businesses increasingly reopen.
Read more

Hartlepool elects a Conservative MP for the first time since the constituency's creation, after Jill Mortimer wins by-election.
Read more

Insulate Britain is blocking traffic at junction 18 of the motorway.
Read more

Radar scans have revealed the impact on the seabed from cruise ships moored during the pandemic.
Read more

Tipping Point: Woman has voice reconstructed thanks to ITV...

The three men convicted of killing Ahmaud Arbery were sentenced to life in prison. Gregory and Travis McMichael do not have the possibility of parole. William "Roddie" Bryan is eligible for parole after 30 years. Mark Strassmann reports.
Read more

Next Africa: Ramaphosa Has Yet to Rescue Eskom Two...

The rock star says claims by Game of Thrones actress Esme Bianco are part of a "coordinated attack".
Read more