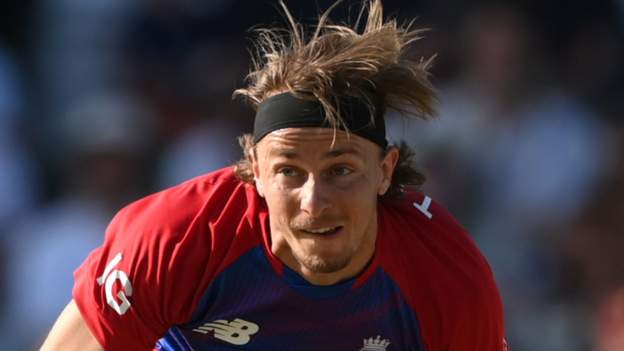 Surrey and England bowler Tom Curran will be out for around four months with a stress fracture in his lower back.

Curran, 26, returned from a stint in the Big Bash in December and scans have confirmed the extent of the injury.

Surrey said Curran will not be fit before the start of the T20 Blast, expected to begin in early summer.

The 26-year-old had already been left out of England’s 16-player squad for the Twenty20 series against West Indies, which starts later this month.

Curran’s younger brother Sam was ruled out of the T20 World Cup and Ashes with a back stress fracture last autumn.

Tom has been a regular in England white-ball squads in recent years, playing 28 one-day internationals and 30 Twenty20s. Chet Hanks has posted a rant against coronavirus vaccines and told sufferers of the virus to "get over it," a year after his parents, Tom Hanks and Rita Wilson, were hospitalized with severe cases of Covid-19.
Read more

Suspects in Aiden Leos Road Rage Shooting Got Into...

Marcus Anthony Eriz, 24, and Wynne Lee, 23, are charged in the May shooting death of Aiden Leos.
Read more

Friends, family and others touched by Gabby Petito's life and loss gather to remember her Sunday in Holbrook, New York.
Read more

Last autumn, the government said it would not meet the 0.7% aid target in the coming financial year.
Read more

New York Gives Go Ahead for Sports Betting From...

Approval was given to Caesars Sportsbook, DraftKings, Fanduel and Rush Street Interactive, while another five betting sites are working to meet requirements.
Read more

Montana Gov. Greg Gianforte (R) on Monday signed three bills seeking to restrict abortion in the state, including one piece of legislation that bans abortion after 20 weeks of pregnancy.One of the bills bans the pr...
Read more

Jordan Binnington made 45 saves to help the St. Louis Blues snap a seven-game skid a 3-1 win over the Vegas Golden Knights on Wednesday night.
Read more

Detained Australian Academic Will Face Trial in China Next...

Australian academic Yang Hengjun will face trial in China for espionage next week, a development that is sure to strain already fraught ties between Beijing and Canberra.
Read more

The warring factions of the Democratic Party are digging in on their competing positions surrounding President Biden's domestic agenda, raising the prospect that a bipartisan infrastructure bill will fail if it hits the H...
Read more

Giannis Antetokounmpo plays down comparisons to Michael Jordan after a historic display in game three of the NBA Finals.
Read more

Worshippers pray at gas station in Lebanon amid fuel...

Garbage trucks at a Suez SA depot in Paris. Want the lowdown on European markets? In your inbox before the open, every day. Sign...
Read more

Computer trouble has halted views from the Hubble Space Telescope since Sunday as NASA struggles to fix the issue and get the observer back online.NASA ...
Read more

Meet The Freshman Class Of Mindy Kaling’s The Sex...

The pay raise will impact nearly 70,000 federal employees across all agencies.
Read more

Surgeon general on Omicron: Next few weeks will be...

“The challenge is that the entire country is not moving at the same pace,” Vivek Murthy said.
Read more

COVID patient talks about collapsing on floor of antibody...

Toma Dean said she was afraid to "run out of breath" if she stood for too long.
Read more

Since the coronavirus pandemic began, colleges have seen their largest two-year decline in enrollment in 50 years, according to a study from th...
Read more

Colombia's Egan Bernal extends his lead in the overall standings as Mauro Schmid of Switzerland wins stage 11 of the Giro d'Italia after a dramatic breakaway.
Read more

Mick Jagger and Paul McCartney have reignited the rivalry between The Rolling Stones and The Beatles. Jagger responded to a comment made earlier this week by McCartney during a concert.
Read more

Women’s Champions League: When is the draw for the...

Arsenal are the only British side in the last 16 of the women's Champions League - but who could they face and when is the draw?
Read more

EU summit to load pressure on Poland over rule...

European Union leaders will pressure a defiant Polish Prime Minister Mateusz Morawiecki to fall back into line on recognizing that EU law trumps national decision-making, hoping that dialogue will stave off a fundamental crisis in the bloc
Read more

Tim Scott: Could be ‘very hard’ to reach police...

Sen. Tim Scott (S.C.), the lead Republican negotiator on police reform, says it will be "very hard" to reach a bipartisan deal by the end-of-June deadline if senators working on the issue can't get a proposal down on pape...
Read more

A husband and wife in their 70s were attacked and tied up in the raid on their Dumfries home.
Read more

An airplane carrying parachutists crashed during a flight over the Republic of Tatarstan in Central Russia on Sunday, Reuters reports. 16 passengers were killed, while six are in a serious condition
Read more

Giannis Antetokounmpo scored 34 points and the Milwaukee Bucks rolled to a 107-96 Game 4 victory on Sunday to tie their second-round playoff series with the Brooklyn Nets, who lost Kyrie Irving to a sprained right ankle.
Read more

Sean Hannity slammed Biden for wreaking havoc for the U.S. and pointed out that he is unsuccessful at uniting his party to get the infrastructure bill through
Read more

Here’s what we know about Ronald Greene’s death in...

A lawsuit filed by Greene's family and body camera video of Greene's encounter with Louisiana State Police officers raise questions about what happened in May 2019.
Read more

The Realme 8 has a good screen, camera, battery life and performance, but is held back by a divisive design.
Read more

Covid Vaccine Exports Stumble in a Global Race Against...

Indian pharmaceutical executive Sai Prasad was speaking for many in the vaccine industry when he criticized the U.S. for blocking shipments of key raw materials needed to produce Covid-19 inoculations.
Read more

Most Americans think they can spot fake news. They...

As many as three in four Americans overestimate their ability to spot false headlines -- and the worse they are at it, the more likely they are to share fake news, researchers reported Monday.
Read more

Coronavirus: Long Covid treatment service to be set up...

It is thought that about 21,000 people in Northern Ireland are affected by the condition.
Read more

Tottenham say they are "appalled" that Talksport failed to challenge a caller who aimed an anti-Semitic term at chairman Daniel Levy.
Read more

Vice President Harris will visit Lake Mead in Nevada on Monday to receive a briefing from Interior Department officials about the impact of this year's drought and highlight the Biden administration's proposals to address...
Read more

Rainbow Six Siege has introduced the Showdown event again in the game which has the sheriffs taking on the Graveltop Gang.
Read more

Hyundai and Kia are recalling more than 550,000 cars and minivans in the U.S. because the turn signals can flash in the opposite direction of what the driver intended
Read more

Prominent South Carolina lawyer Alex Murdaugh, whose wife and son were fatally shot nearly three months ago, suffered a “superficial” gunshot to the head and is expected to recover, authorities and relatives said Sunday.
Read more

Bright News offers a latter-day campfire around which Black Americans can tell and hear stories about their world. The post Crafting New Narratives for Black America appeared first on The American Conservative.
Read more

Feds aim to reduce lines of planes waiting to...

White supremacists are planning rallies in cities nationwide this weekend under the banner of "White Lives Matter."
Read more

The University of Missouri has suspended all fraternity activities after a freshman was found unresponsive Wednesday after a frat party and taken to the hospital.
Read more

Japan's defence ministry said on Sunday that a submarine believed to be from China was spotted in waters near its southern islands, as maritime tensions persist in the Pacific.
Read more

Covid vaccine programme rolled out to over 45s this...

Invitations will be sent out to those in this age group from this week, the first minister confirms.
Read more

Virginia man sentenced to 33 months for role in...

Can a little pill cure the troubles of some nursing homes?  One analyst thinks it can go a long way toward repairing the damage...
Read more

The Federal Election Commission (FEC) on Thursday recommended that Congress ban political campaigns from using pre-checked boxes on their websites that would automatically register donors to give recurring contributions....
Read more

Attorney sues to stop ‘most severe’ vaccine mandate at...

An attorney representing students at Indiana University in Bloomington, Indiana, told Fox News' Tucker Carlson on Monday that it is unconstitutional for it or any institution to mandate a coronavirus jab in order to enroll in classes.
Read more

Google Meet is fixing one of the most annoying...

Google Meet will now warn users who are causing an echo.
Read more

Singapore Ramps Up Quarantine Hotels To Cope With Covid...

Singapore has increased the number of hotels that can be used to quarantine people as the city-state seeks to control the spread of the virus amid the recent wave of infections.
Read more

Pro-Trump candidates are racing to launch gubernatorial campaigns across the country, posing a test for the former president’s political brand in a number of key states going into 2022.Over the July 4 holiday weekend, former GOP Chairman Allen West...
Read more

Two men are arrested on suspicion of trafficking and kidnap as part of Andrew Gosden investigation.
Read more

Social media giant Facebook more than doubled its profits in the last quarter, thanks to a huge jump in mobile advertising and 400 million new users. Also, General Motors is issuing six more recalls of over 700,000 vehicles, including more than 20 models in t…
Read more

US officials are seeking a $25 million fine from Air Canada, accusing the airline of failing to provide timely refunds to more than 5,000 passengers during the coronavirus pandemic.
Read more

Craig Gordon - labelled "Peter Pan" by his captain - continues to sprinkle stardust on Scotland amid his fairytale renaissance.
Read more

Herms Looks to the Heavens Via the Wrist

Biotechnology company Novavax is working on a vaccine to combat the new Omicron coronavirus variant that was first detected in South Africa. Public health officials in the U.S. and abroad are worried t...
Read more

‘The Book of Deer’ to return to north east...

The 10th Century Book of Deer will go on show in Aberdeen next year after funding was secured.
Read more

Several of the Texas Democrats who fled the state capital to avoid voting on an election integrity bill have tested positive for the coronavirus.
Read more

The move follows the FDA's authorization earlier this week and an hours-long meeting of the CDC's outside advisers.
Read more

Sen. Joe Manchin (D-W.Va.) pushed back on Tuesday against including paid leave in President Biden's spending package, arguing that the proposal would run afoul of Senate rules on what can be in the bill."I'm workin...
Read more

Tragedy happened in the waters between France and Britain; three US men guilty of murdering a black jogger. We take you into the surreal world of the non fungible token.
Read more