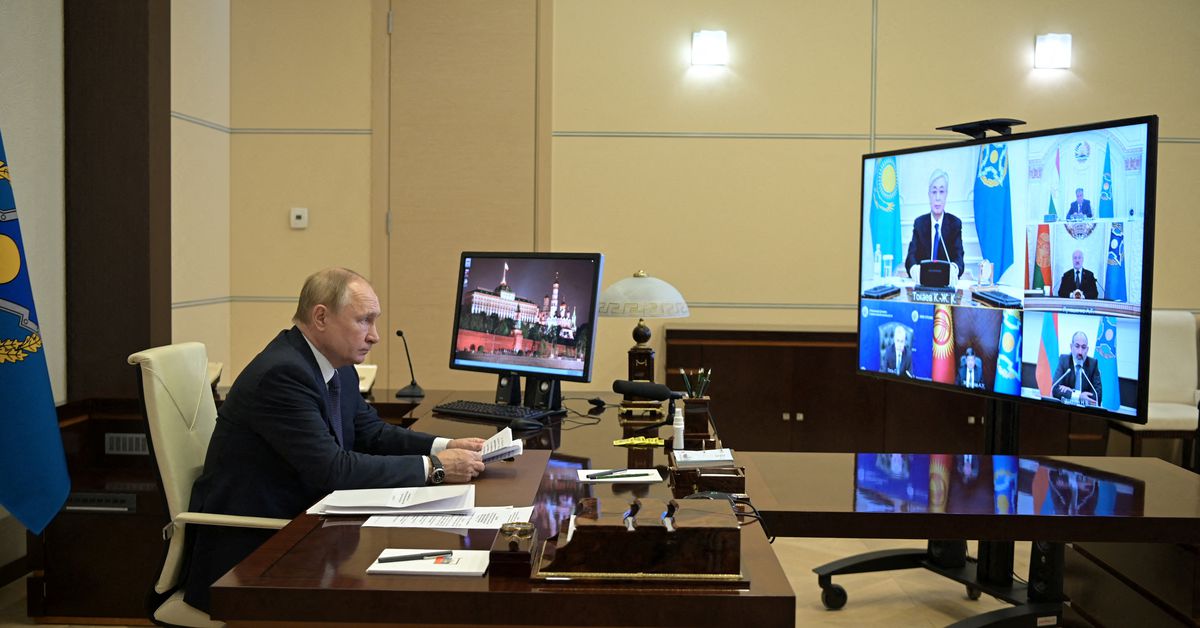 He told an online meeting of the leaders of the Russian-led Collective Security Treaty Organisation by video link that the deployment of CSTO troops had prevented armed groups from undermining the basis of power in Kazakhstan.

“Of course, we understand the events in Kazakhstan are not the first and far from the last attempt to interfere in the internal affairs of our states from the outside,” Putin said.

Thousands of people were detained and some public buildings were torched during mass anti-government protests last week.

“The measures taken by the CSTO have clearly shown we will not allow the situation to be rocked at home and will not allow so-called ‘colour revolutions’ to take place,” he said, referring to several popular ex-Soviet uprisings in the last two decades.

He said the CSTO contingent would be withdrawn once its mission was complete and when Kazakh President Kassym-Jomart Tokayev thought they were no longer needed.

Putin made the comments after a speech by Tokayev, whose bravery he praised. The Kazakh leader said order had been restored but that the hunt for “terrorists” was ongoing. read more

Demonstrations started against a fuel price rise before erupting into a wider protest against Tokayev’s government and the man he replaced as president, 81-year-old Nursultan Nazarbayev.

“The threat to Kazakhstan’s statehood arose not because of spontaneous protests and rallies concerning fuel prices. It is because destructive internal and external forces took advantage of the situation,” Putin said. An airport official in Nepal says 14 bodies have...

One arrest as Southmead Hospital A&E shut in security...

Cybercriminals have found a cunning new way to evade...

Stacey Abrams Gets Past Mask Scandal to Qualify for...

Shane Warne bowls Mike Gatting with ‘Ball of the...

Bill Barr: Most damaging part of progressivism is its...

Instacart’s CEO Fidji Simo Is ‘Worried’ About Inflation of...

Sue Gray not expected to wait for police inquiry...

The end of orphanages starts with family strengthening programs

Katie Britt and Mo Brooks will advance to Republican...

Europe’s Biggest Lithium Mine Is Caught in a Political...

Hilary Duff sparks controversy over daughter not in a...

6 new things we learned from the first public...

Philippines complains of Chinese fishing ban and ‘harassment’ at...

Wolves 0-3 Brighton: It was the worst performance since...

Thornton Wilder celebrated on 125th anniversary of his birth

Woman Backed For Not Letting Other Workers Have Dogs...

Exercise may protect your brain even if you have signs of dementia,...

How to manage mindless snacking from your pandemic home office