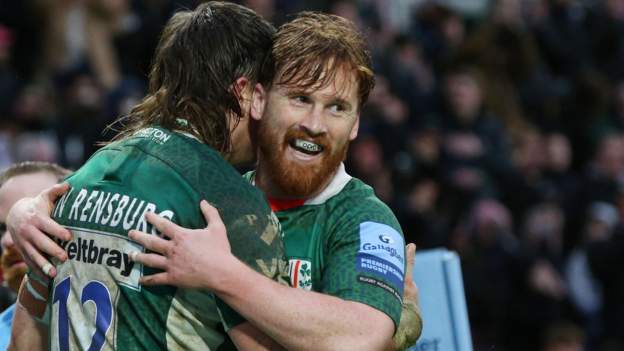 A Rory Jennings penalty and tries from Benhard Janse van Rensburg and Ben White put Irish 17-7 up at the break.

Harry Thacker’s converted try midway through the first half was all that Bristol managed in west London.

Jennings kicked the only points of the second half, sealing a win that moved Irish up to ninth in the table.

A losing bonus point from their narrow defeat against Gloucester last time out ensured the resurgent Exiles went into the bottom-of-the-table clash with Bristol a point and place better off than the visitors, whose win against Harlequins on 27 December was their first Premiership triumph since September.

Jennings, who was called up to start for the Exiles after Paddy Jackson failed a late fitness test, put the hosts ahead in soaking conditions from a seventh-minute penalty kick right in front of the posts.

Bristol hooker Thacker snuck over for the game’s first try midway though the first half to edge them ahead, with AJ MacGinty giving Pat Lam’s side a four-point lead with his conversion.

Van Rensburg, however, restored Irish’s lead, with White then crashing over from close range to give the Exiles a 10-point advantage at half-time.

Jennings added to the lead with a successful penalty kick immediately after the restart, with the day only getting worse for Bears, as they lost Gabriel Ibitoye and Noah Heward to injuries in quick succession soon after.

Jennings missed with his next penalty attempt, but was on target with the boot again late on to complete the home side’s third win in four Premiership games.

Nigeria floods: ‘I have nowhere to go’

Tinder introduces a way for members to go on...

How tragedy moulded a father and MMA champion

Ke Huy Quan thanks Spielberg for first role in...

Rookie Bryson Stott putting it all together for Phillies

Notable quotes from Dan Lanning as Ducks prepare for...

One Company’s Mission to Save the Bees

What travelers can expect for Labor Day weekend and...

Gadgets unveiled at CES but Russia is banned

Meta Portal owners can now use their devices as...

Alligator kills person after dragging them into retention pond

The Harms of Psychedelics Need to Be Put Into...

Equal Ventures has a new pair of funds, filings...

Boy who died in Appley Bridge quarry swim was...

Big Oil Walks Away After Decades in Russia

The propositions still in play