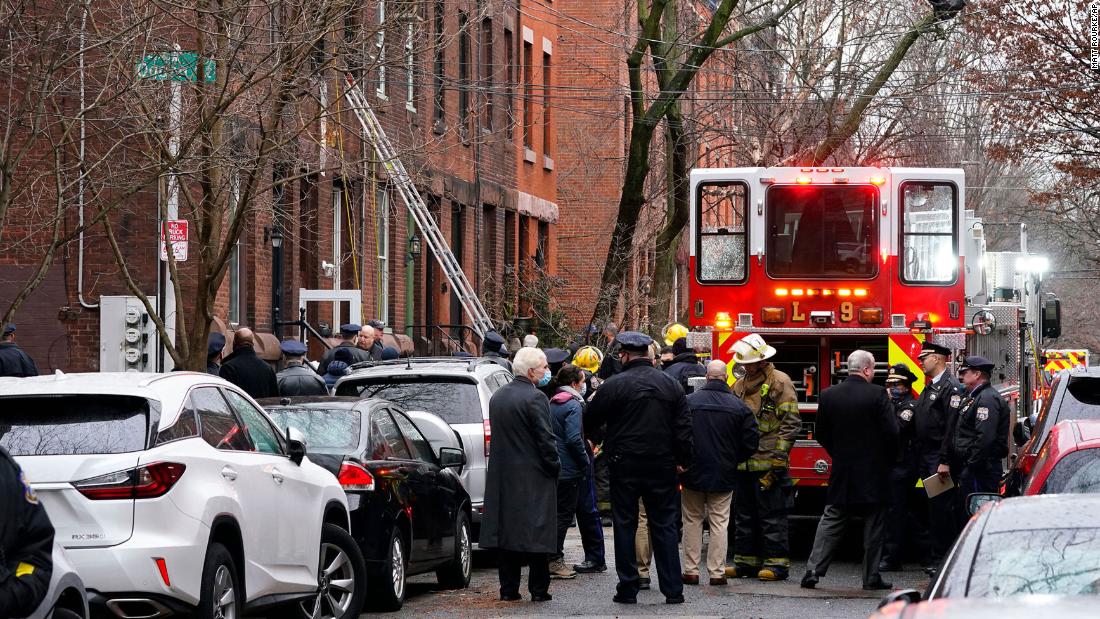 (CNN)Investigators are working to determine the cause behind a deadly fire in Philadelphia that took the lives of 12 people on Wednesday.

One avenue being pursued is whether a child under the age of five playing with a lighter under a tree could have sparked the blaze, according to Jane Roh, spokesperson for the Philadelphia District Attorney’s office.

Other potential causes are also being examined, Roh said, and there are currently no plans to bring charges against anyone in relation to the fire.

Firefighters responded to flames around 6:40 a.m. Wednesday and found “heavy fire” in a kitchen area at the front of the second floor of the building, officials said.

There was “nothing slowing that fire from moving,” said Philadelphia Deputy Fire Commissioner Craig Murphy, who told reporters during a news conference Thursday that the Philadelphia Police Department and the ATF Philadelphia branch were assisting with the investigation.

“It’s a very traumatic scene, it’s a very complex investigation,” said Fire Deputy Chief Dennis Merrigan with the Philadelphia Fire Marshal’s Office. “It’s something that would challenge us if we had to do it on our own.”

The fire took place at a home that records show is owned by the Philadelphia Housing Authority, a municipal agency that leases homes to people with low income.

Three sisters and all but one of their 10 children died due to the fire, their family said.

Rosalee McDonald, 33; Virginia Thomas, 30, and Quinsha White, 18, were killed, according to their cousins Frank and Pamela McDonald. Six of Rosalee McDonald’s children and three of Thomas’ children also died in the fire. The ages of their children were not given.

A GoFundMe page has been established to help pay for funeral expenses.

Victims remembered as others describe their escape

The women who died were very close and had lived together in the apartment since they were teenagers, their family said.

“They were both good people, good mothers and were very family-oriented,” Frank McDonald told CNN. “Rosalee was one of the best people you could ever meet. She was very supportive — they both were. They came down to help me with my business when I opened it.”

Qaadira Purifoy told CNN affiliate KYW-TV that many of those who died were family members.

Debra Jackson’s sister was able to escape the home’s first floor with three of her children, she told KYW-TV.

“Two of her sons got burned, she probably is just smoke inhalation. But thank God that they’re alive,” Jackson said. “My heart goes out to the family that lost all their family.”

Philadelphia’s school district said Wednesday it was working with City Council President Darrell Clarke to set up a fund to help the affected families.

Some of the children who died were students in city schools, the district said, without saying how many. The district said it also has made counseling and support services available for grieving students.

The home had been legally subdivided into two apartments since the 1950s and has had no violations, according to a spokesperson for the Philadelphia Department of Licenses and Inspections.

Deputy Fire Commissioner Murphy initially told reporters that four smoke detectors were in the building, “and none of them operated.”

Murphy later indicated that Philadelphia Housing Authority records show that at least six battery-operated smoke detectors had been installed there from 2019 to 2020.

However, Dinesh Indala, PHA’s senior executive vice president of operations, said the agency had different information about the detectors.

Faulty smoke detectors are treated as emergencies and are replaced in 24 hours if requested, Indala said, and the authority does inspections annually.

“Every time we come in for an inspection, as is evident from the last one, we had to replace two batteries, replace the smoke detectors. And these are 10-year smoke detectors, so that’s something we run into quite often on our properties,” Indala said. Most companies are failing to implement their zero trust...

What Is R. Kelly on Trial For and Where...

After abortion ruling, WVa could become 1st to pass...

As Covid Restrictions Are Lifted, Caution Is Essential

Douglas Ross will not take part in ‘pretend’ independence...

News From Ukraine Is Unfolding in Fragments Over Social...

What happens to our brains when we die? A...

Mental health is on full display at the Winter...

The Rise and Fall of Imran Khan

Meal frequency and portion size: What to know

Scientists will set 1,000 traps for murder hornets this...

Dennis Gartman on the Markets (Radio)

Ingraham: If appointed, Judge Jackson would be a ‘stamp’...

Everyone Wants to Be an Entrepreneur

Jurgen Klopp: Liverpool manager to be given freedom of...

Miller Contradicts Himself, Says Trump Did Not Order to...

Trucker blockades at border a threat to auto industry

Appeals court could soon rule on challenge to Madison...