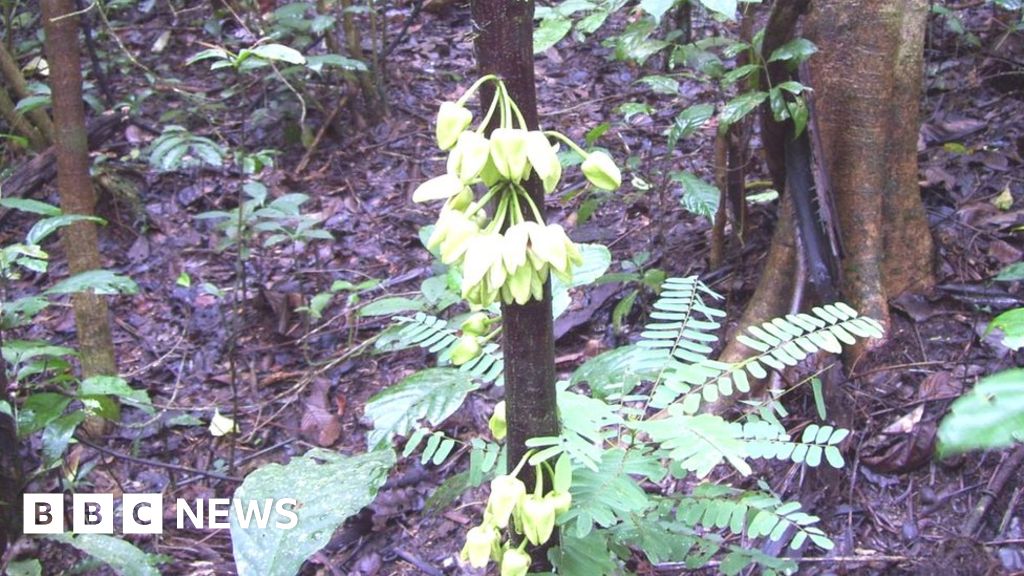 A tree that is new to science has been named after Leonardo DiCaprio.

Scientists at the Royal Botanic Gardens, Kew, say they wanted to honour the star for his help in saving a rainforest from logging.

The tree, which has been given the official name, Uvariopsis dicaprio, grows only in the Cameroon forest known for its incredible biodiversity.

“We think he was crucial in helping to stop the logging of the Ebo Forest,” said Dr Martin Cheek of Kew.

Scientists and conservationists were horrified when they heard of plans to allow vast swathes of the Ebo Forest to be opened up for logging.

Image caption, The ‘dicaprio tree’ grows only in one location in a remote tropical forest

One of the largest relatively untouched rainforests in Central Africa, it is home to the Banen people and an array of unique flora and fauna, including threatened gorillas, chimps and forest elephants.

International experts wrote a letter to the government documenting the precious animal and plant species at risk of extinction. The issue was picked up by DiCaprio, whose social media posts to his millions of followers added momentum to the campaign.

The government later revoked plans to allow logging, although the forest has yet to be officially designated a national park.

“This could just be a stay of execution,” Dr Cheek added.

The “dicaprio” tree is the first plant new to science to be officially named by Kew scientists in 2022, through publication in the scientific journal, PeerJ.

The small tropical evergreen tree has glossy yellow flowers that grow from its trunk. A member of the ylang ylang family, it has been found only in a small area of the forest and is critically endangered.

Last year, more than 200 plants and fungi from across the word were officially named by Kew scientists and their collaborators, including a pink lily from the same forest, an insect-trapping wild tobacco plant found in Australia and an orchid with star-like flowers from the island of Madagascar that can grow in darkness.

Several of these new species are already extinct and many are threatened due to deforestation, land clearance and droughts, floods and fires driven by climate change.

Of 16 new species of orchids found in Madagascar, three are thought to be extinct in the wild due to destruction of their habitat. One has disappeared due to forests being chopped down to grow plants for geranium oil used in the aromatherapy industry in Europe. And a new Cape primrose from Katanga in Congo is at risk from copper mining.

Until a species has a scientific name, assessment of its extinction risk is near impossible, which makes protection from extinction very difficult.

Dr Martin Cheek said the list of show-stopping discoveries from 2021 is another reminder that this is our last chance to find unknown species, name them and protect them before they become extinct.

“There are still thousands of plant species and maybe millions of fungal species out there that we don’t know about,” he said. “This natural habitat that they’re growing in – especially forests, but other habitats too, is increasingly and more rapidly being destroyed by us humans without knowing what’s there.” The lore of ‘CODELs’: How foreign travel helps Congress...

Rudy Giuliani, a target in Atlanta probe into Trump...

Dad Dragged Over Refusal To Get Between Wife and...

Behind the Nametag: Finding Home with the Cutting Edge...

Who Can Be Racist?

Covid-booster response hope for most vulnerable

French voters go to the polls in 1st round...

Texas guardsman who drowned trying to save a migrant...

US hospitals letting infected staff members stay on the...

With browsers on my mind, I gave Opera GX...

Woman on fishing boat off Florida coast stabbed by...

China to appoint Horn of Africa envoy amid Ethiopia crisis