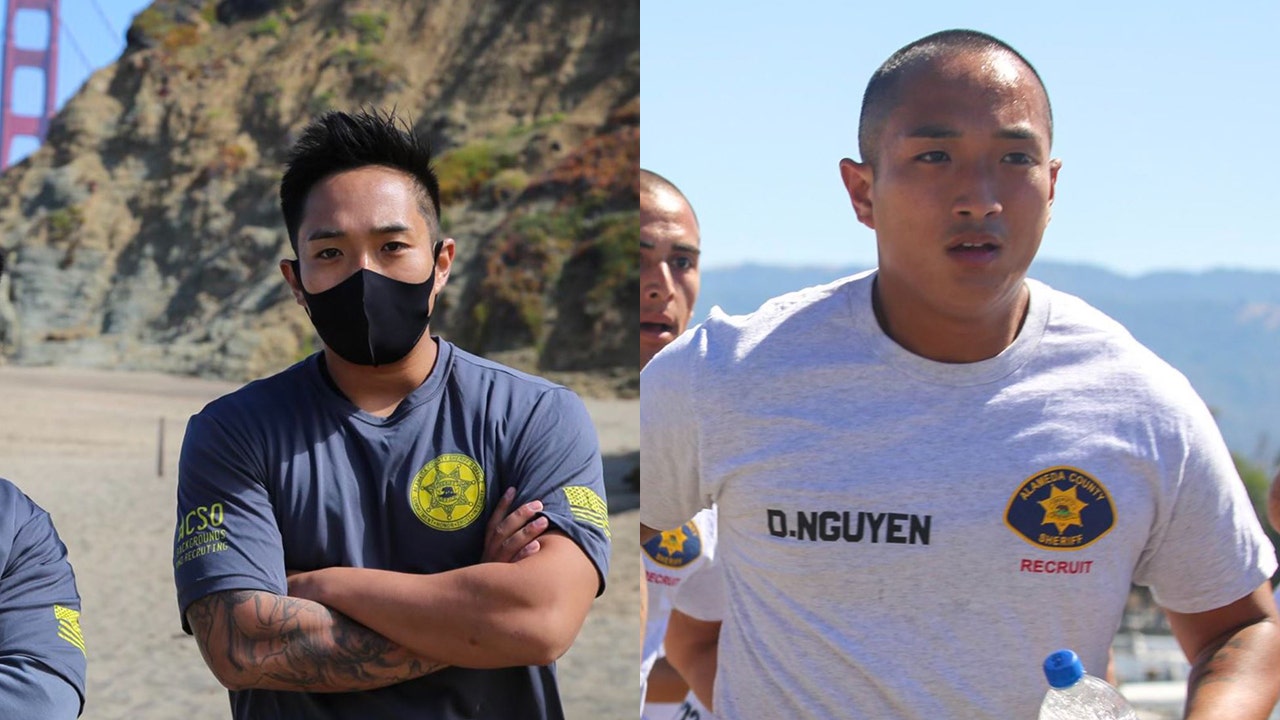 A California sheriffs department recruit who was killed in an Oakland freeway shooting Tuesday has been identified, the Alameda County Sheriffs Office confirmed.

David Nguyen, 28, was off duty when he was shot while driving home from the academy, authorities said. He was set to graduate in February.

Investigators havent concluded if Nguyen was the target of the shooting.

“I don’t understand why someone would choose to use their weapon, probably over nothing,” Alameda County sheriff’s Sgt. J.D. Nelson told FOX 2 of the Bay Area. He called Nguyen “well-liked” and “highly motivated.”

Nguyen’s family and girlfriend were “distraught” over his killing, FOX 2 reported.

After Nguyen was shot near the San Francisco-Oakland Bay Bridge Toll Plaza, his vehicle crashed into a guardrail. He was transported to a hospital, where he died from his injuries, according to FOX 2.

HISTORIC 346 OFFICERS SHOT IN LINE OF DUTY IN 2021: NATIONAL FRATERNAL ORDER OF POLICE

“In Loving Memory of Recruit David V. Nguyen of the Alameda County Sheriffs Office 172nd Academy,” the sheriffs office wrote in a Twitter post along with photos of Nguyen.

Later Tuesday, personnel from the sheriffs office and the California Highway Patrol lined up and saluted his flag-draped casket as it was loaded into a coroners van at an Oakland hospital.

“Our Deputies have just loaded the body of our young police academy recruit for a law enforcement procession from Highland Hospital to our Coroners Bureau,” the sheriffs office wrote in a statement posted with video to Twitter on Tuesday. “We are heartbroken and disturbed by this senseless act of gun violence.”

Alameda County Sheriff’s Office recruit David Nguyen was shot and killed while driving home from the training center on Tuesday.

U.S. Rep. Eric Swalwell, who represents the Bay Area, tweeted Wednesday, “God bless this @ACSOSheriffs recruit, murdered last night near the Bay Bridge. Peace to his family. And hopefully the thunder of justice comes soon to his killer.” Scott Walker was accused of killing Bernadette, 17, after she claimed he sexually abused her.
Read more

An extraordinary crisis in Belarus is putting a months-long simmering conflict to the forefront of President Biden’s agenda, while also raising the stakes for an upcoming summit with Russian President Vladimir Putin.Biden is likely to confront Putin...
Read more

Five days after a military coup ended the power-sharing government between the army and civilians, large protests are taking place across Sudan to demand the restoration of the administration led by Prime Minister Abdalla Hamdok. Also in the programme: the …
Read more

Biden speaks to CEOs about efforts to ease supply...

President Biden on Tuesday spoke with the chief executives of four major retailers and shipping companies about efforts by the administration and private sector to ease supple chain disruptions.
Read more

MusicMatch makes it easy to share music between streaming...

The new MusicMatch app lets you decide whether a track you want to hear plays in Spotify or Apple Music.
Read more

The man was fatally shot in Portland after a pro-Trump car rally last year.
Read more

Hydro-Rich Chinese City Is Said to Clamp Down on...

A Chinese city with abundant hydropower is said to have begun a sweeping clampdown on crypto mining firms this week, following an earlier ban from the central government on such activities.
Read more

One of the National Park Service's protected animals, the bison, was recently designated by Congress as the nation's first official mammal. Not long ago, this iconic symbol of the American frontier nearly disappeared from the landscape. Mark Strassmann report…
Read more

Optimism from climate talks: Warming projections down a bit

USA Gymnastics named its women's team for Tokyo on Sunday night and, with no surprise, Simone Biles is the headliner.
Read more

Attorney Benjamin Crump is among the lawyers who announced a lawsuit on behalf of the National Council of Negro Women against Johnson & Johnson. Watch his remarks here from a press conference in Washington, D.C.
Read more

What if a hardliner becomes president in Iran?

Fewer freedoms for women and a tense relationship with the West are expected from the next leader.
Read more

It is still not safe for emergency crews to search for a missing worker at the site of a huge blaze.
Read more

Millions return to in-person classes despite huge jump in...

Sir Iain Duncan Smith tells the BBC he was called "Tory scum" before someone tried to hit him in the head.
Read more

Puerto Rico is pulling the plug on a $70 million project to build a film district in the capital -- complete with sound...
Read more

Conservative radio host Pastor Robert "Bob" Enyart, who swore off Covid-19 vaccines, has died from complications due to the virus, his co-host announced on social media Monday.
Read more

Sen. Tom Cotton, R-Ark., responded Wednesday to the media's sudden warming to the lab-leak hypothesis concerning the origin of the coronavirus, telling Fox News" that "I'm not looking for any awards."
Read more

Polish parliament to debate bill to step up govt...

Polish lawmakers are expected to debate on Wednesday a nationalist Law and Justice (PiS) party bill that critics say could curb access to teaching on LGBT and reproductive rights and give the ruling PiS more control over schools.
Read more

Asian shares are rising, boosted by the U.S. Federal Reserve's announcement on winding down the extraordinary aid for the economy it has been providing since early in the pandemic
Read more

World number one Novak Djokovic needs just one hour to see off Dennis Novak and help Serbia beat Austria on the second day of the Davis Cup.
Read more

The attorney representing self-proclaimed "QAnon Shaman" Jacob Chansley for charges related to the Jan. 6 Capitol riot prides himself on being a "bit egotistical," and having a "big mouth."St. Louis-based lawyer Al...
Read more

Vodafone and TalkTalk are leading the market with fantastic...

Colorado loosens restrictions on antibody treatment, holds off on...

Colorado announced on Friday it will be loosening its restrictions on ant...
Read more

Nike dropped soccer superstar Neymar after he refused to...

Nike ended its partnership with soccer star Neymar last year due to his refusal to cooperate with a probe into sexual assault allegations against him, the company said.  Nike confirmed with The H...
Read more

President Joe Biden and CDC Director Dr. Rochelle Walensky are making impassioned pleas to Americans not to let their guard down in the fight against COVID-19
Read more

Vermont Gov. Phil Scott (R) wants his state to become the latest to conduct all elections entirely by mail, a move he says would expand voter access and turnout at a time when many Republican-led states are deb...
Read more

Imagine this! You are spending a beautiful summer morning on the planet of Batuu at Disney’s Hollywood Studios at Walt Disney World Resort. As you watch the Batuuan suns rise overhead, you spot your Resistance friend Chewbacca in the midst of an animated disc…
Read more

FA Cup: Vote for best goal of third round

Watch the top picks of the goals from the FA Cup third round and vote for your favourite.
Read more

So can you hug your grandkids now?

People who have been vaccinated against Covid-19 can safely enjoy a much more open lifestyle, although still a far cry from what was normal a year ago, according to new and much-anticipated guidance released Monday by the Centers for Disease Control and Preve…
Read more

Owners Slammed for Carrying Dogs Around in Clear Suitcases...

Similar clear suitcase designs, featuring dogs and cats, are being sold online for as much as $206.31.
Read more

Someone please stop me from buying the Samsung CRG9...

The Samsung CRG9 is one of the most luxurious gaming monitors, and it's nearly half price for Amazon Prime Day.
Read more

Residents of the Pacific island nation have been urged to evacuate to higher ground immediately.
Read more

Mark Barrott is wanted by police in connection with his wife's death in Leeds at the weekend.
Read more

Virgin Media O2 provides ‘shot in the arm’ for...

Google Workspace is getting a major upgrade to rival...

Google has expanded the scope of Workspace to include all of its users.
Read more

Emma Watson addressed considering bowing out of the "Harry Potter" franchise after working on several films due to the pressures of fame.
Read more

Novavax will delay submitting its COVID-19 vaccine for emergency use authorization until the fourth quarter of this year, the company announced Thursday.The Maryland-based drug maker previously s...
Read more

The first minister warns the union may break up if the UK government does not change strategy.
Read more

The first draft of a proposal to redraw congressional district boundaries in Georgia shows Republicans are aiming to knock off Rep. Lucy McBath (D) in a high-stakes battle for control of suburban communities su...
Read more

Gottlieb says Biden administration “in a better position” for...

Indian conglomerate Reliance Industries (RELI.NS) delayed the launch of a low-cost smartphone it is developing with Google Read more

Learn the ins and outs of Python, JavaScript, Java,...

You can increase your marketability by picking up a new coding language with Udacity.
Read more

Fran Alonso hails Celtic's first trophy in 11 years as "amazing" as his side beat Glasgow City 1-0 in the SWPL Cup final at Firhill.
Read more

Prime Video joins the 8K Association – but what does this mean for viewers?
Read more

What Happens to the Vaccine Misinformation That Gets Pulled...

Asian shares mostly higher after US Fed signals on...

Asian shares are mostly higher as investors interpreted comments from the head of the U.S. Federal Reserve as signaling low interest rates were here to stay for some time
Read more