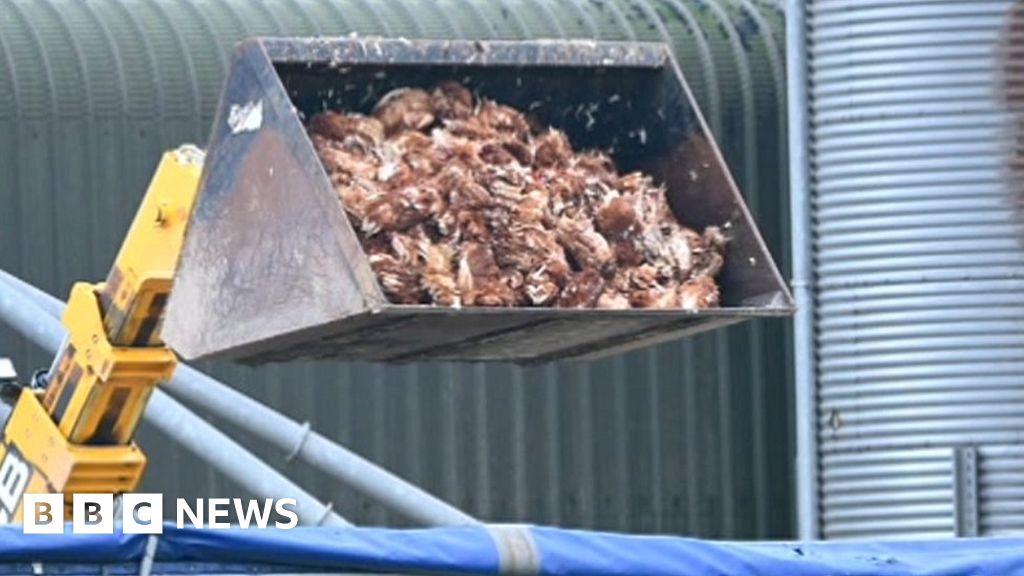 Image caption, Animal welfare group Open Cages said this image of a cull was taken on a Lincolnshire farm

About one million birds have been culled to stop the spread of bird flu in Lincolnshire, the BBC estimates.

The virus was first confirmed in Lincolnshire on 11 December and 12 outbreaks have so far been confirmed in the county.

It comes amid England’s largest outbreak of the H5N1 virus, with 63 confirmed cases since November.

The Department for Environment, Food & Rural Affairs (Defra) has not confirmed the number of culled birds.

Professor Ian Brown, of the Animal and Plant Health Agency, said: “There is a high density of poultry farms in Lincolnshire and the virus has found its way in because it has been able to breach the biosecurity barrier of the farms.”

Image caption, The H5N1 virus is highly contagious and can destroy poultry flocks.

The latest outbreak of the virus was first discovered in North Yorkshire on 21 November, and was detected in Lincolnshire in December.

Exclusion zones have been put in place around Lincolnshire sites, including near Mablethorpe, Alford and South Elkington.

There have also been two outbreaks near Pocklington, in East Yorkshire.

Image caption, The UK Health Security Agency (UKHSA) has said avian flu is primarily a bird disease and the risk to human health is very low

An Avian Influenza Prevention Zone, requiring all bird owners to keep their flocks indoors, is in force across the UK, said Defra.

The UK’s chief veterinary officer Dr Christine Middlemiss has said: “We are seeing a growing number of bird flu cases both on commercial farms and in backyard birds right across the country, with a high number of cases in Lincolnshire.”

Wild birds migrate to the UK from mainland Europe during the winter so it is vital to not allow wild birds to mix with chickens, ducks, geese or other birds, she said.

The infection could also be spread on people’s clothes and shoes, she added. How Biden came around to banning Russian gas and...

Saudi Arabia looks forward to welcoming Blinken in near...

Amazon Fire TV will be the best place to...

Cold water swimming: what is the safest way to...

A chance to improve research

Could No Way Home revive a former Spider-Man movie...

Biden talks immigration, economy during meeting with president of...

Hundreds protest in Tunis against president’s plan for constitution...

How I Create Magic Through Accessibility in Attractions at...

Brooke Shields says women over 40 are ‘unrepresented’ in...

A development in the O’Toole family feud you may...

Ukrainians Lie in Azovstal Plant Without Limbs: ‘Impossible to...

‘Earthship’ homes made from old cans, bottles and tires...

How Iran Has Brought Israel and Arab States Closer:...

The most popular race in the state

Sony could take on Tesla with its own EV range – with...