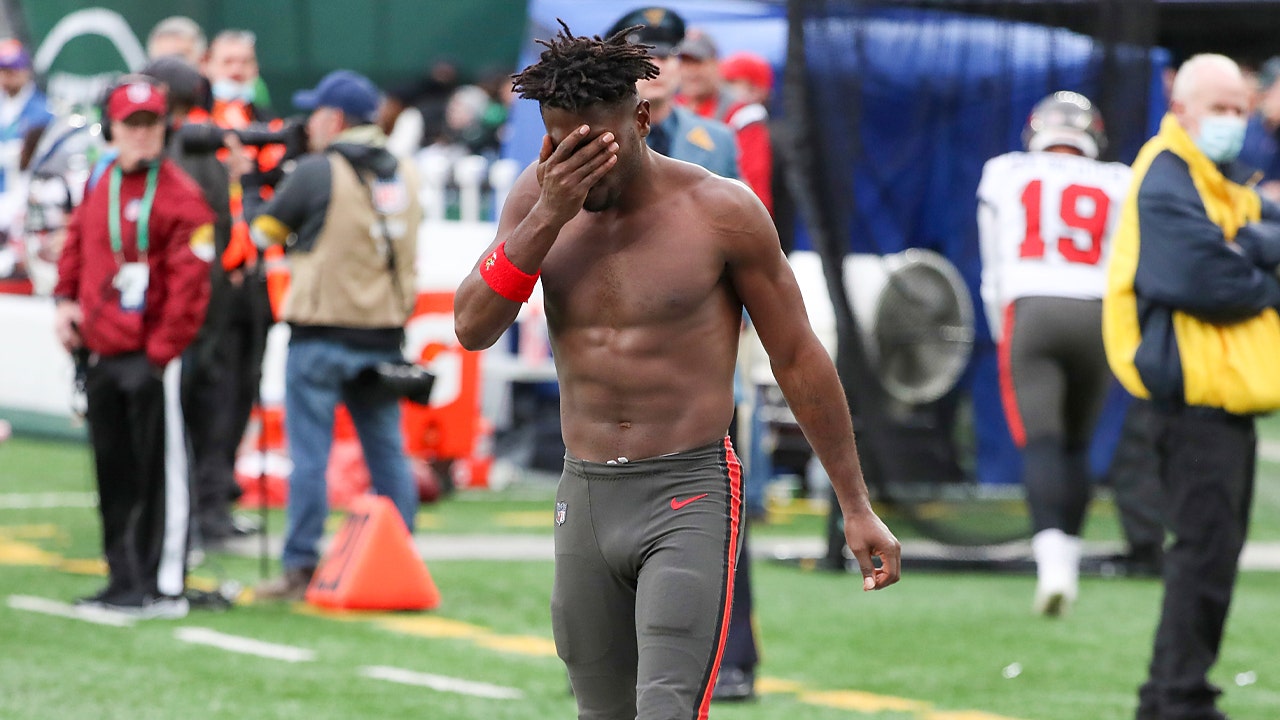 Antonio Brown left MetLife Stadium on Sunday afternoon during the Tampa Bay Buccaneers game against the New York Jets, and threw some of his gear into the stands and gave fans a peace sign before jetting to the tunnel and never returning.

Tampa Bay Buccaneers wide receiver Antonio Brown (81) gestures to the crowd as he leaves the field while his team’s offense is on the field against the New York Jets during the third quarter of an NFL football game Sunday, Jan. 2, 2022, in East Rutherford, N.J. Brown left the game and did not return.

After the game, Bucs head coach Bruce Arians said Brown was “no longer a Buc.” But as of Tuesday night, the former All-Pro wide receiver still remained on the teams roster.

The details have yet to come out about the sideline altercation, but according to one NFL reporter, Brown may get another opportunity to play for another team.

A N.J. State Police trooper, background, watches as Tampa Bay Buccaneers wide receiver Antonio Brown (81) throws his gloves into the stands while his team’s offense is on the field against the New York Jets during the third quarter of an NFL football game Sunday, Jan. 2, 2022, in East Rutherford, N.J.

“If Antonio Brown wants a job on another team in the NFL, he can have one. That is not an opinion. That is what I know,” she wrote.

Initial reports indicated that Brown was concerned about his ankle and didnt want to play. Arians, however, said Brown never told him he was injured and added that the two had a “conversation” and that the player left the field. Arians didnt say what the conversation included.

Antonio Brown #81 of the Tampa Bay Buccaneers warms up prior to the game against the New York Jets at MetLife Stadium on Jan. 2, 2022 in East Rutherford, New Jersey.

, the Buccaneers were talking with the NFL about moving forward with Browns situation. The wide receiver is sure to face some kind of discipline from the NFL due to the outburst and leaving the stadium in the middle of the game against the Jets. Derry: Condemnation of poppies and flags on Bogside bonfire

Kolkata St Xavier’s teacher: ‘I was forced to resign...

Office and Microsoft Teams are getting even closer

Scientists say temperatures are getting ‘hotter faster’ than their...

‘The worst is yet to come’: Russians rush to...

The majority of America is hitting the snooze button....

GV aims to help build a company that can...

Justin Hoogendoorn on the Markets (Radio)

Hume on partisan political exaggerations: These are not normal times