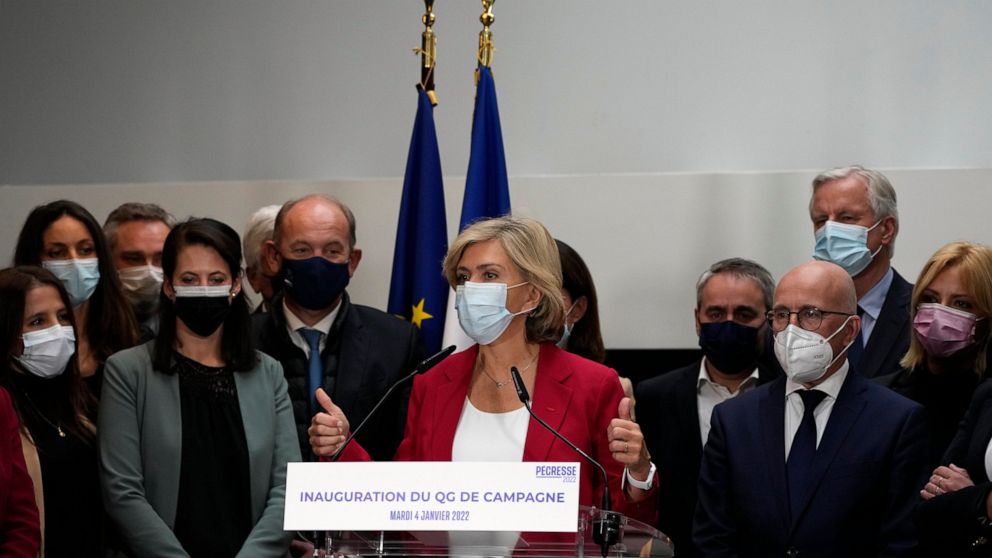 PARIS — The conservative candidate in France’s presidential election said on Tuesday she will adapt her campaign to pandemic conditions, focusing on social media and shunning large voter rallies in favor of small gatherings.

Like Republicans Party candidate Valérie Pécresse, other contenders running in Aprils election are also mulling how to reach out to voters amid the pandemic.

That campaign won’t look like any other one,” Pécresse said as she inaugurated her campaign headquarters in Paris.

She said a maximum limit of 2,000 people indoors will be respected, in line with a rule that currently applies to cultural activities. Proof of vaccination will also be requested at rallies.

France has registered record numbers of infections in recent days primarily due to the highly-contagious omicron variant.

The Constitutional Council said that COVID-19 restrictions cannot apply to political activities in order to ensure campaign fairness. So it’s up to each presidential candidate whether or not to apply virus-related rules.

We will implement the rules that apply to the normal, daily life of French people, and I believe its a very good decision even if it penalizes us, Othman Nasrou, Pécresses campaign spokesman told the Associated Press.

The centrist party of President Emmanuel Macron, who is expected to run for a second term, said it will also respect the 2,000-people limit. So will Socialist contender Anne Hidalgo and Green candidate Yannick Jadot, who said they prefer to organize smaller meetings.

Candidates from the far-right and the far-left have said they are against such a strict limit. Yet the head of the National Rally, Marine Le Pen, pushed back a major rally scheduled for mid-January to February because of the COVID-19 situation.

Meanwhile, approval of a bill on a vaccine pass allowing holders access to venues and gatherings has been delayed.

The government wants to allow only the fully vaccinated continued access to places such as restaurants, cinemas, theaters, museums, and sports arenas. The pass will also be required on inter-regional trains and buses and domestic flights.

Lawmakers from the left and the right of the political spectrum teamed up to vote against the bill late Monday while many members from Macron’s centrist majority were absent. The debate is due to start again on Tuesday evening.

The bill is still widely expected to be approved, but later than expected a setback for the government which wants to implement the measure in mid-January.

More than 90% of French adults have been vaccinated. US says it will not resume Sudan aid after...

MAGA hats and QAnon: Inside Trump’s first rally of...

Shockwaves As Dad Set To Tell Son His New...

Alibaba Drops Amid Signal Some Investors May Be Poised...

Zelensky meets with Harris: Ukraine army ‘defending all of...

More than 100 Rohingya land on beach in Indonesia’s...

The time to address the student mental health crisis...

Students walk out over COVID-19 in-person learning conditions in...

We’re Erasing a Big Chunk of the Retail Shock...

Airbus Ahead of Boeing in $10 Billion Malaysia Order...

‘I’m A Flight Attendant, These Are The Secret Areas...

The impact of the first public Jan. 6 hearing

Broad bowls most expensive over in tests after Bumrah...

Navy to salvage stealth F-35 that crashed on carrier...

Pfizer CEO predicts omicron vaccine will be ready in...

Princess of Wales meets crew of HMS Glasgow at...

Iowa announces upcoming end to COVID-19 as a public...