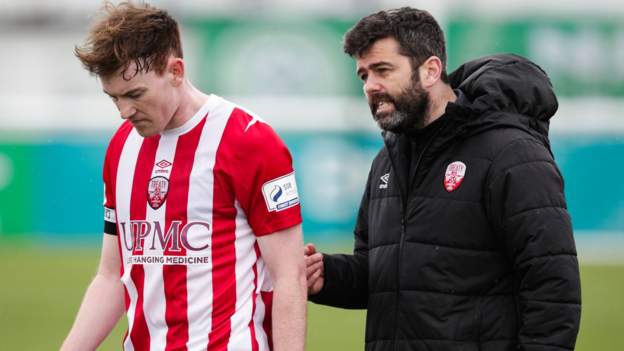 Less than six weeks after having no players and no division, League of Ireland side Treaty drew 0-0 at Bray Wanderers on the opening day of the season

Is it possible to assemble a 26-man squad at three days’ notice on no money, for a team with potentially no fans – and reach the play-offs?

It turns out the answer is yes.

As Treaty United manager Tommy Barrett tried to throw together a side for the League of Ireland First Division season, he did admit that he “felt like an idiot ringing the lads saying we could have a team, we’re not sure”.

So what exactly happened?

At the end of 2019, two-time Irish champions Limerick FC were refused a playing licence because of their debt, ending their 83-year spell in the league.

An entirely new team called Limerick United was set up by Conn Murray, but Limerick FC owner Pat O’Sullivan took legal action – because he had registered that name without ever using it – so Treaty United was born.

Treaty is the nickname of Limerick city and county, dating back to the 1691 treaty ending the Williamite War.

The new club had the distinction of having a women’s side before a men’s – managing to get a team in the 2020 Women’s National League, but not the League of Ireland.

They applied for a licence to enter the First Division in November 2020, but when the fixtures came out in early February ‘TBC’ [to be confirmed] was one of the teams. TBC eventually became Treaty, but not until 20 February – three days before their squad had to be finalised.

Barrett, who had been Limerick FC’s final manager, could not sign anybody until then.

He told BBC Sport: “We weren’t told a thing. We heard it’s likely but then we heard it could be Shamrock Rovers II [the reserve side who took Limerick’s place in 2020], we heard a couple of other clubs.

“There was talk of Treaty not being ready yet. ‘Can they go in 2022? With Covid there might not be time.’ We were getting little rumours, little leaks of conversations from meetings.

“We weren’t told a week or two in advance – we were told on the day.”

Funded by members, they were to be an amateur team in a division where everyone else is either professional or semi-professional.

So Barrett had to make some calls – although luckily he had started the groundwork in January with a training session for players who were interested if there was to be a new team.

Left-back Marc Ludden – who became one of Treaty’s star players, making the First Division team of the year – was one of the few there with extensive League of Ireland experience.

Barrett said: “We took him down to training with 40 lads. I could see on his face… he’s thinking ‘what am I getting myself into here for no money?’ He was taken aback.”

A 26-man squad sounds like a lot for the second tier of Irish football, but Treaty did not have any youth teams at the time.

Barrett ended up with a mix of players he had played with a decade earlier, some he had managed with Limerick FC’s senior and under-19 teams and word of mouth. Some even called him to ask if they could join.

Jack Lynch, who became Treaty’s captain, put Barrett in touch with some of the team-mates he had played alongside the previous season at Galway United, including Ludden.

“It was tough getting them over the line because we only had three days to get them signed and a lot of lads who needed transfers [from local non-league clubs]. We were an unknown entity then which didn’t help,” he said.

They were able to add a bonus player too.

Barrett added: “Initially we thought we had to sign 25. Our secretary thought that was the maximum squad. But it turns out it was a women’s league rule we got mixed up with.”

Callum McNamara was initially the man set to miss out. “He had a good attitude but no experience,” said Barrett. “We had to shed 7-8kg off him because he was too strong.”

The 20-year-old ended up being a key member of the team, playing 22 times.

Treaty’s opening competitive game, a 0-0 draw at Bray Wanderers, came six weeks after they were without players and a league.

The club exceeded nearly all expectations, finishing in the play-offs, where they lost to eventually promoted UCD.

They won only three of their final 12 games, but Barrett thinks it was “wear and tear and tiredness” that told and not the pressure of playing in front of returning crowds in the middle of the season.

“The crowds, I think there was a bit of nervousness at times, but I don’t put performances down to that,” he added.

“We were an amateur team against professional players in a lot of matches. We had 27 games after a short pre-season.

“We weren’t ready to go up as a club anyway. We have to build foundations and get everything right off the pitch first.”

Chiedozie Ogbene, now a senior Republic of Ireland international at Rotherham, was playing for Limerick FC just over a year before their demise

This is not a simple phoenix club story either. The original Limerick FC are still going in the youth leagues, with ex-Birmingham City defender Michael Johnson their sporting director.

Yet pretty much all the supporters went over to a team they could not go to watch at first – because of Covid rules – who play in different colours (red and white instead of blue), do not have Limerick in their name and do not claim to be a direct continuation of the old club.

“There was a bit of concern,” admitted Barrett, on whether the fans would follow the new team who ended the home season with a crowd of 3,000 against UCD.

“Limerick FC were seen as a regional club with fans from neighbouring counties but Treaty, we branded ourselves as a mid-west [region of Ireland] club.

“It’s still probably a bugbear to a few, but once people saw the results and the things we’re doing right, they’re happy enough to have senior football back in the region and have been very supportive.” The elephant not in the debate room

Nigeria to seek damages from suppliers of gasoline with...

Murphy calls Florida gun law the ‘right one’ as...

Marines holding disciplinary hearings this week in sinking of...

US ambassador: ‘Calling for both sides to de-escalate only...

Tunisian president gets powers to dismiss judges under new...

Medicaid funding for US territories is broken — Build Back...

‘Either the best or the worst camera phone’ watch...

Philippines airlifts aid to areas cut off since earthquake...

Jury selection to begin in trial of officer involved...

Summer in the U.S. could be eight degrees hotter...

Followers of cleric told to withdraw from Iraq’s parliament

Body of co-pilot who exited plane mid-flight during emergency...

‘After Life’ Season 3 Cast: Meet the Characters in...

Abortion issue belongs ‘in the hands of the people,...