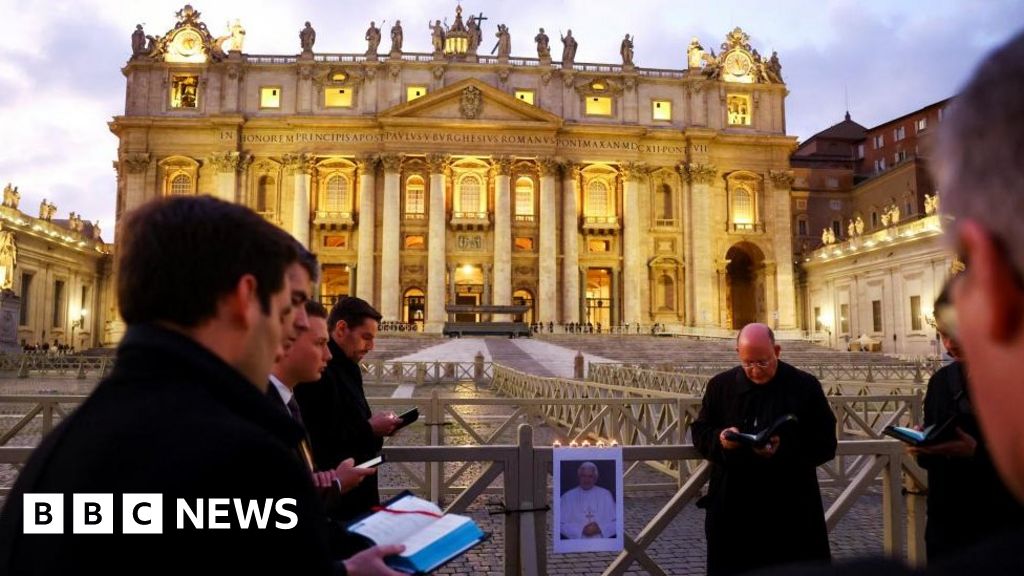 Tens of thousands of people are expected to pay their respects to former Pope Benedict XVI when his lying in state begins at the Vatican later.

He died on New Year’s Eve at the age of 95, almost a decade after he stood down because of ill health.

Pope Francis will preside over Thursday’s funeral – the first time that a Pope will be buried by his successor.

The Vatican says the service will be simple, solemn and sober.

Hi body will be displayed for three days in an open casket at St Peter’s Basilica, with people allowed to pay their respects until 7pm each evening.

The funeral will take place in St Peter’s Square, before the Pope Emeritus is laid to rest in the tombs beneath the Basilica.

The Vatican released pictures of the body on Sunday, dressed in red papal mourning robes and wearing a gold-trimmed mitre.

Media caption, Watch: Pope Francis expresses thanks for the life and service of Benedict XVI

Tributes have poured in from around the world, and the funeral is expected to draw crowds of thousands.

The last paper funeral, that of Pope John Paul II in 2005, was one of the largest Christian gatherings in history, and drew an estimated four million people to Rome.

Arrangements for the service are not yet clear, as many of the traditions associated with the death of a serving Pope are not required – most notably the election of a successor.

Details of the guest list have not been released, but the Vatican has said that it will include delegations from Italy and Benedict’s native Germany.

Pope Francis paid tribute to his “dearest” predecessor after his death.

US President Joe Biden lauded the former Pope’s “lifetime of devotion to the Church”, while Italian Prime Minister Giorgia Meloni hailed him as “a great man whom history will not forget”.

In Brazil – the largest Catholic nation in the world – incoming President Luiz Inácio Lula da Silva said he wished “comfort to the faithful and admirers of the Holy Father”.

Pope Benedict was a controversial figure, and some have criticised him for failing to tackle allegations of clerical sexual abuse. Australia seeks to reassure citizens on COVID after cruise...

Australia to toughen privacy laws with huge hike in...

North Korea Is a Nuclear State. The West Has...

Clench your jaw to skip a track: That’s the...

Fifteen taken to hospital after 11-car crash on M42

Rights groups: Egypt should open civic space ahead of...

The worry in Davos: Globalization is under siege

Tyler Perry’s personal connection to ‘A Jazzman’s Blues’ and...

GoPro Hero 11 Black: what we want to see

Hey Google, Congress needs to do more to rein...

Disco gets brands to boogie together on customer acquisition...

Morocco looks back at historic World Cup run with...

Mother of Uvalde victim speaks out for 1st time

Nvidia calls off its efforts to acquire Arm

Benettons in Talks With Blackstone for Atlantia, Reject GIP...

NFL odds: Defensive Player of the Year odds and...

Your Saturday UK Briefing: Kwarteng Out, Hunt In

Eye on America: Crime Without Punishment

Human error more likely in JFK near collision after...

Man rescued after house slides off its foundation in...

Elon Musk is being investigated by the SEC for...

US economy resilient despite rising prices

Allen out at Brookings