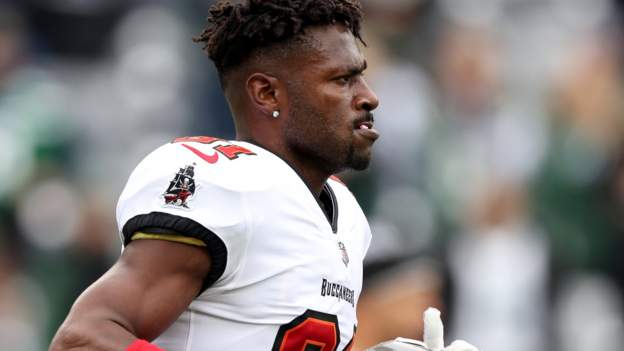 Wide receiver Antonio Brown has been sacked by the Tampa Bay Buccaneers after dramatically walking out of their game at the New York Jets.

The 33-year-old stripped off his jersey and pads, gestured to the crowd and walked back to the locker room midway through the third quarter.

Brown was apparently angered by a conversation with one of the team staff, while on the sidelines.

“He is no longer a Buc,” said head coach Bruce Arians after the game.

“That is the end of the story, Let’s talk about the guys who went out there and won the game.”

Brown, who helped the Bucs win Super Bowl 55 last year, had three receptions for 26 yards at the time he left the field.

He has 42 catches for 545 yards and four touchdowns in seven games this season.

A seven-time Pro Bowler with the Pittsburgh Steelers, Brown has had a chequered career.

He was released by New England Patriots in 2019 after one game amid allegations of sexual misconduct and threatening text messages. Hong Kong to report new record of at least...

On Having to Show My Papers

Rocket part expected to crash into moon on Friday...

Worker Gets Sweet Revenge on Colleague Stealing His Food:...

Many employees still use unauthorized services to get work...

Catch up on what you need to know

A 4-year-old vanished from her South Carolina home in...

Gingrich on ‘Fox & Friends’: Biden’s ‘censorship’ board would...

Russia cuts off gas exports to Finland in symbolic...

MoneyWatch: Markets tumble a day after the Fed’s interest...

Qatari official says it will be ‘almost impossible’ to...

Covid: Boris Johnson to set out next steps on...

Nancy Pelosi pledges US support until ‘fight is done’

Terra’s Field of Dreams Is Now a Nationals Nightmare

Half in new poll say they’re frustrated with Biden’s...

Jockey Sonny Leon seems as surprised as anyone by...

Another independent Hong Kong site halts production out of fear for 'safety...