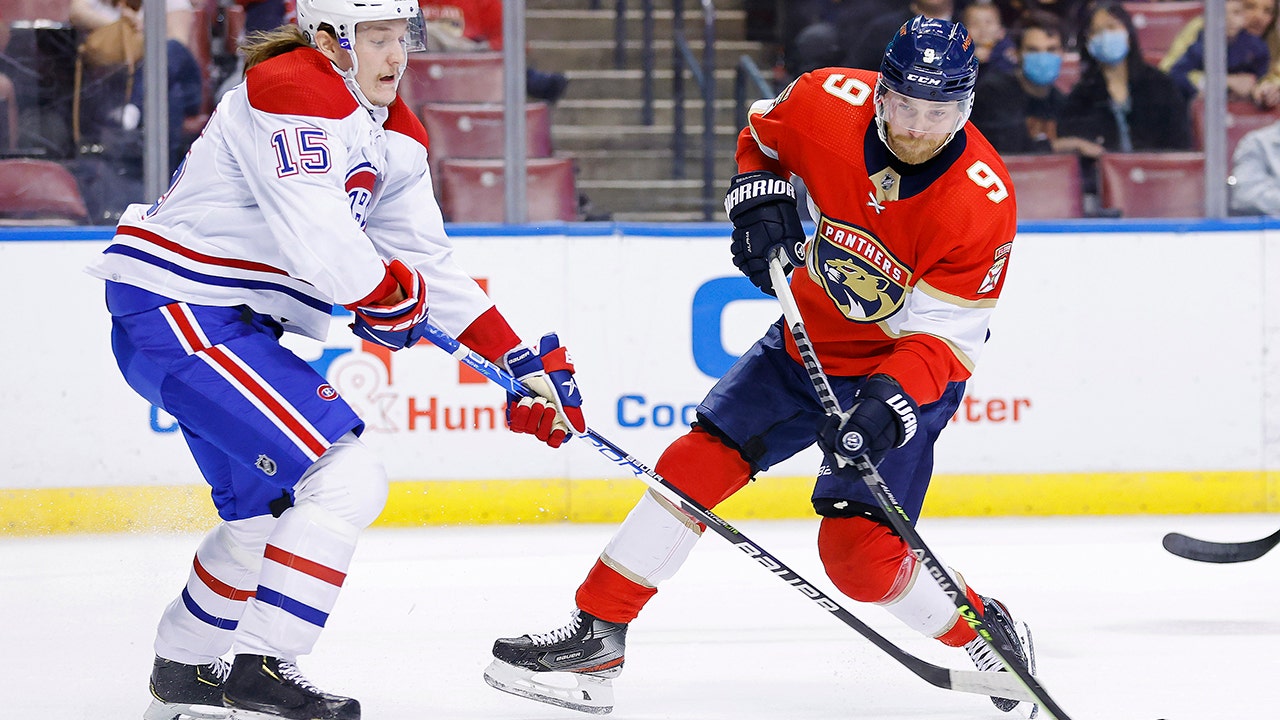 Sam Bennett scored twice and Sergei Bobrovsky made 29 saves to lead the Florida Panthers past the Montreal Canadiens 5-2 on Saturday for their third straight win.

Aleksander Barkov, Frank Vatrano and Mason Marchment also scored and Jonathan Huberdeau had three assists for the Panthers, who improved to 17-3 at home and 14-0 overall when leading after two periods.

Jonathan Drouin and Nick Suzuki scored for Montreal, which continued to be decimated by coronavirus issues, with 16 players in COVID-19 protocol. Sam Montembeault stopped 43 of 48 shots.

Vatrano skated toward the net and redirected a feed from Sam Reinhart for his eighth goal to give the Panthers a 3-2 edge at 17:30 of the second period.

Florida Panthers center Sam Bennett (9) takes a shot on goal against the Montreal Canadiens during the first period of an NHL hockey game, Saturday, Jan. 1, 2022, in Sunrise, Fla.

Florida then opened a 4-2 advantage 15 seconds into the third period when Bennett deflected MacKenzie Weegars shot past Montembeault for his 11th goal.

Montreal went ahead 2-1 at 9:29 of the second, when Suzuki scored his seventh goal by putting in the rebound of Jesse Ylonens shot.

Bennett scored 32 seconds into the game to give Florida a 1-0 lead. It was Bennetts 10th goal.

Montreal forward Jake Evans and defenseman Alexander Romanov were placed in the NHLs COVID-19 protocol before the game. The Canadiens dressed 11 forwards and five defensemen due to the 16 players in COVID protocol. Theres plenty of time for them to recover before the Canadiens next game.

Montreal was scheduled to start a five-game homestand on Tuesday; the Canadiens had games against Washington, Toronto, Buffalo and Columbus postponed because of attendance restrictions put in place by government officials. They wont play now until Jan. 12 at Boston in a game that was originally scheduled to happen in Montreal.

Between coronavirus-related shutdowns, the NHLs holiday break and the upcoming postponements, Montreal is in the middle of a stretch where it will play only three games in a 26-day span.

Florida won 59 games in 2021, by far the most ever by the Panthers in a calendar year. Montreal even with a run to the Stanley Cup Final in there lost a staggering 67 games in 2021. This Canadiens team is on pace to finish with the second-worst record in the franchises storied history.

NOTES: It was the first New Years Day game for Montreal since it beat Boston 5-1 before 67,246 fans at Gillette Stadium, home of the New England Patriots, in 2016. Florida had not played on Jan. 1 since a 2-1 win at Buffalo in 2006. … It was the first of four meetings between the teams this season. They dont meet again until March 24 at Montreal. Jonathan Huberdeaus sister, Josiane, sang the national anthems. She received a hug from her brother after she finished.

Inside the space hotel scheduled to open in 2025

White House unveils plan for next phase of COVID-19...

Hungry javelina gets stuck in car, goes for ride...

Fitbit deals at Amazon for Valentine’s Day: get the...

Japan’s troubled Toshiba proposes outside directors to board

Mexico scientist gets 4 years for spying for Russia...

Fighting for relief for Black farmers

All aboard the minibus

Family courts: One fifth of divorces wrongly ending up...

A New President in the Philippines

From Washington: The White House’s Plan To Combat Inflation

Bird strike stops train dead in its tracks for...

Boy who died in Appley Bridge quarry swim was...

Security threats could be terminal for your SMB, so...

US won’t deliver water to California farmers amid severe...

Gunmaker executives to testify to U.S. House hearing on...