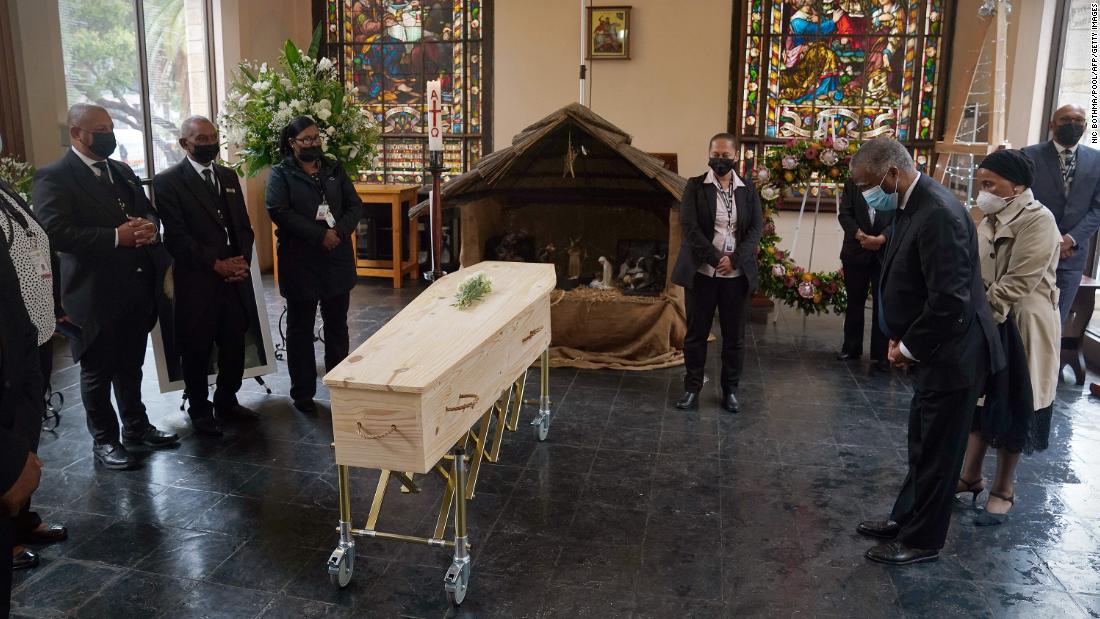 Tutu died last Sunday at the age of 90. He had been in poor health for several years.

South African President Cyril Ramaphosa was expected to deliver the main eulogy and Cape Town Archbishop Thabo Makgoba was presiding over the service at St. George’s Cathedral on Saturday.

Tutu’s body will be cremated in a private ceremony after Saturday’s requiem mass and will then be interred behind the pulpit at the cathedral.

For decades, Tutu was one of the primary voices pushing the South African government to end apartheid, the country’s official policy of racial segregation. He won a Nobel Peace Prize in 1984, before apartheid ended in the early 1990s and the long-imprisoned Nelson Mandela became South Africa’s first Black president.

The revered anti-apartheid fighter will be remembered as one of the most important voices of the 20th century. However, his funeral was set to be subdued: Before he died, Tutu asked for a simple service, according to two of his foundations.

“He wanted no ostentatiousness or lavish spending. He asked that the coffin be the cheapest available, and that a bouquet of carnations from his family be the only flowers in the cathedral,” they said.

South Africans paid their respects before Tutu’s plain pine coffin on Thursday and Friday as it lay in state at the cathedral.

Tutu’s funeral was also limited to just 100 people, in line with current South African government Covid-19 regulations. St George’s Cathedral has appealed to South Africans to attend the services in their local communities instead of traveling to Cape Town.

Events were planned throughout the country to give South Africans the opportunity to collectively mourn ‘”the Arch,” as he was known, while still practicing social distancing.

A week-long remembrance began Monday with the ringing of the bells at St. George’s Cathedral, a church famous for its role in the resistance against apartheid rule. St. George’s held a special place in the late archbishop’s heart, so much so that he requested his ashes be interred there in a special repository.

On Wednesday, several religious leaders gathered outside Tutu’s former home on Vilakazi Street — where his friend and ally Nelson Mandela also grew up — in Soweto, a township in Johannesburg, for a series of events. Another memorial service was held Wednesday in Cape Town, and Tutu’s wife, Nomalizo Leah Tutu, met with friends of the late archbishop on Thursday for an “intimate” gathering.

Tutu was born October 7, 1931, in Klerksdorp, a town in South Africa’s Transvaal province, the son of a teacher and a domestic worker. Tutu had plans to become a doctor, partly thanks to a boyhood bout of tuberculosis, which put him in the hospital for more than a year, and even qualified for medical school, he said.

But his parents couldn’t afford the fees, so he turned to teaching.

“The government was giving scholarships for people who wanted to become teachers,” he told the Academy of Achievement. “I became a teacher and I haven’t regretted that.”

However, he was horrified at the state of Black South African schools, and even more horrified when the Bantu Education Act was passed in 1953 that racially segregated the nation’s education system. He resigned in protest. Not long after, the Bishop of Johannesburg agreed to accept him for the priesthood — Tutu believed it was because he was a Black man with a university education, a rarity in the 1950s — and took up his new vocation.

He was ordained in 1960 and spent the ’60s and early ’70s alternating between London and South Africa. He returned to his home country for good in 1975, when he was appointed dean of St. Mary’s Cathedral in Johannesburg. As the government became increasingly oppressive — detaining Black people, establishing onerous laws — Tutu became increasingly outspoken. This is probably why your ‘Check Engine’ light is...

Ex-US soldier fined for trying to take gun on...

One of the most annoying Xbox Series X problems...

Attorneys in Florida condo collapse seek about $100M in...

US pipeline agency pulls back plan to assess climate...

How Henry the cat won the hearts of Addenbrooke’s...

NBA roundup: Nuggets win another blowout, this time over...

Newsom grapples with his ‘third-world country’

Dana Loesch: ‘This party can’t get it together’

Xbox Cloud Gaming just got a lovely upgrade on...

The Family and Medical Leave Act was a good...

How to Attract Companies to List in London (Audio)

Jill Biden pitches in at donation center in Kentucky...

Native American tribe displaced centuries ago gets land back