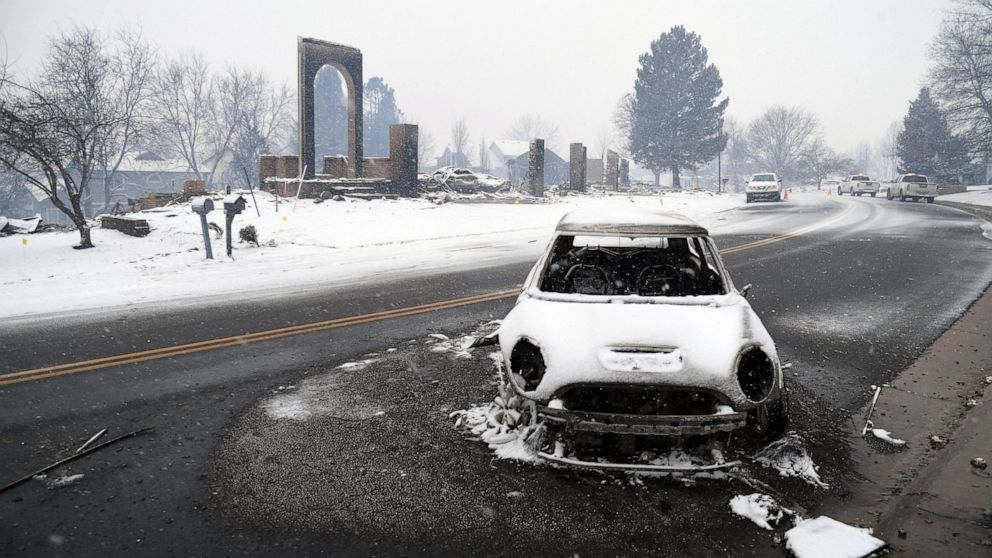 SUPERIOR, Colo. — Hundreds of Colorado residents who had expected to ring in 2022 in their homes are instead starting off the new year trying to salvage what remains of them after a wind-whipped wildfire tore through the Denver suburbs.

Families forced to flee the flames with little warning returned to their neighborhoods Friday to find a patchwork of devastation. On some blocks, homes reduced to smoking ruins stood next to ones practically unscathed by the fires.

At least seven people were injured, but remarkably there have been no reports of any deaths or anyone missing in the wildfire that erupted Thursday in and around Louisville and Superior, neighboring towns about 20 miles (32 kilometers) northwest of Denver with a combined population of 34,000.

More than 500 homes were feared destroyed and now homeowners face the difficult task of rebuilding amid a global shortage of supplies brought on by the two-year pandemic.

In the way the economy is right now how long is it gonna take to build all these houses back? asked Brian ONeill, who owns a home in Louisville that burned to the ground.

Cathy Glaab found that her home in Superior had been turned into a pile of charred and twisted debris. It was one of seven houses in a row that were destroyed.

The mailbox is standing, Glaab said, trying to crack a smile through tears. She added sadly, So many memories.

Despite the devastation, she said they intend to rebuild the house she and her husband have had since 1998. They love that the land backs up to a natural space, and they have a view of the mountains from the back.

Rick Dixon feared there would be nothing to return to after he saw firefighters try to save his burning home on the news. On Friday, Dixon, his wife and son found it mostly gutted with a gaping hole in the roof but still standing.

We thought we lost everything, he said, as he held his mother-in-laws china in padded containers. They also retrieved sculptures that belonged to Dixons father and piles of clothes still on hangers.

As the flames swept over drought-stricken neighborhoods with alarming speed, propelled by guests up to 105 mph (169 kph), tens of thousands were ordered to flee.

The cause of the blaze was under investigation. Emergency authorities said utility officials found no downed power lines around where the fire broke out.

With some roads still closed Friday, people walked back to their homes to get clothes or medicine, turn the water off to prevent the pipes from freezing, or see if they still had a house. They left carrying backpacks and pulling suitcases or wagons down the sidewalk.

David Marks stood on a hillside overlooking Superior with others, using a pair of binoculars and a long-range camera lens to see if his house, and those of his neighbors, were still there, but he couldnt tell for sure whether his place was OK. He said at least three friends lost their homes.

He had watched from the hillside as the neighborhood burned.

By the time I got up here, the houses were completely engulfed, he said. I mean, it happened so quickly. Ive never seen anything like that. Just house after house, fences, just stuff flying through the air, just caught on fire.

By first light Friday, the towering flames that had lit up the night sky had subsided and the winds had died down. Light snow soon began to fall, and the blaze, which burned at least 9.4 square miles (24 square kilometers), was no longer considered an immediate threat.

We might have our very own New Years miracle on our hands if it holds up that there was no loss of life, Gov. Jared Polis said, noting that many people had just minutes to evacuate.

The wildfire broke out unusually late in the year, following an extremely dry fall and amid a winter nearly devoid of snow so far.

Boulder County Sheriff Joe Pelle said more than 500 homes were probably destroyed. He and the governor said as many as 1,000 homes might have been lost, though that wont be known until crews can assess the damage.

Its unbelievable when you look at the devastation that we dont have a list of 100 missing persons, the sheriff said.

The sheriff said some communities were reduced to just smoking holes in the ground. He urged residents to wait for the all-clear to go back because of the danger of fire and fallen power lines.

Superior and Louisville are filled with middle- and upper-middle-class subdivisions with shopping centers, parks and schools. The area is between Denver and Boulder, home to the University of Colorado.

Ninety percent of Boulder County is in severe or extreme drought, and it hasnt seen substantial rainfall since mid-summer. Denver set a record for consecutive days without snow before it got a small storm on Dec. 10, its last snowfall before the wildfires broke out.

Bruce Janda faced the loss of his Louisville home of 25 years in person Friday.

We knew that the house was totaled, but I felt the need to see it, see what the rest of the neighborhood looked like, he said. Were a very close knit community on this street. We all know each other and we all love each other. Its hard to see this happen to all of us.

The Associated Press receives support from the Walton Family Foundation for coverage of water and environmental policy. The AP is solely responsible for all content. For all of APs environmental coverage, visit https://apnews.com/hub/environment. Tesla Isn’t Having the Epic End to the Year...

Voces Unidas Through Language: My Role as a Disney...

JPMorgan Rebuilds in Natural Gas With Profits Too Good...

A Trade for a Smile

Toyota Sedan Sales Key to Ranking as Top-Seller in...

Djokovic set for the unexpected as Kyrgios blocks path...

What Does Potassium Iodide Do? Demand for Drug Spikes...

I-95 northbound closed near Pennsport due to crash, fire

GM suspends advertising on Twitter so it can ‘understand’...

The Worst Things You Can Do in a Job...

Tech doesn’t get more full circle than this

Senator Tammy Duckworth calls on Congress to reinstate the...

In Cuba, people arrested during protests go on trial;...

Bus on school trip in Poland crashes into ditch;...

Informant back for testimony in Michigan governor plot trial

Putin mocks West, says Russia will press on in...

NBA odds: Kevin Durant’s next team, from Heat to...

Greece Is Said to Pick Banks for €1 Billion...

North Korea could carry out nuclear tests ‘any time’,...

Afghan refugees in US to receive temporary protected status

Leaky battleship in Texas set to make trip for...

Have Dallas Cowboys set up Dak Prescott to fail?

Truth and the American Tradition